Does this, or does this not, look like spiderwebs? 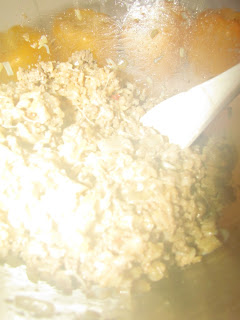 Oh... wow that is a TERRIBLE photo. I forgot that steam + lens = crap picture.

I decided to make Elle's stuffed bell peppers tonight. She's made them a few times and I always manage to pack away mine, the leftovers, and three or four more later on. Then, usually I wake up in the middle of the night, drive to the store for ingredients and drive home high on onion fumes, hold Elle at nail file point and force her to make more so I can eat every single one of them in my own secret shame while the rest of the house sleeps.

Oh, stop judging me. I know that you, yes YOU right there, eat chocolate chips and animal cracker sandwiches in the dead of night and YOU over there, you can't say no to chocolate Teddy Grahms by the boxload. And you? YOU DISGUST ME, YOU. You know who you are. Three words. Garlic. Stuffed. Olives. 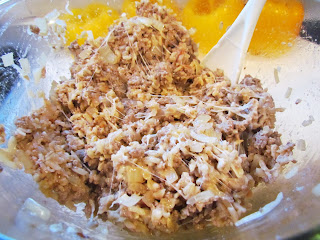 Okay, so lookit. Doesn't that look like rice, ground turkey, onions and SPIDER WEBS? I'm supposed to eat that? Maybe if I just dig around a little, a giant black widow will jump out at my face and eat my EYES. 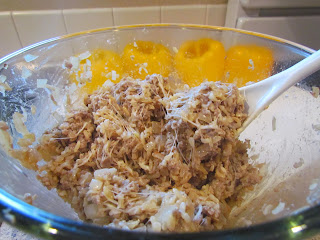 I swirled it around a bit and became somewhat entranced by the sticky, webby gunk until I because grossly  enchanted. I mean, of course I was still going to eat this. I'd just wear sunglasses or something.

Then, I had an idea. Dude, I could totally make Elle pay for grossing me out. I'd make her a Spider Pepper. Check it out. 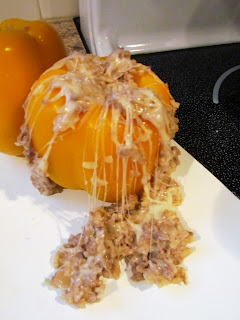 And I totally left that for her like that. Unfortunately, I have a 9 year old who also doubles as a Human Hoover, so she swung by and cleaned it up for me.

I am SO. PISSED. that I never got to see this. Or throw it at your face. Or hide it in your bed.

Good job, Hoover. (I'm totally calling her that from now on. And she'll never know why. Does that make me a bad aunt?)