Yesterday Elle and I tag-teamed here on Eloquence and shared a bit of our late-night antics.

When we left off, Elle was dancing with Flanney and it reminded me of when Gary danced with an oddly-shaped woman in a Dublin Pub. Let's take a look. No real need for this, other than to further embarrass my brother on the inter-web. 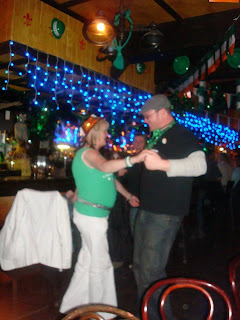 Now, picture Elle and Flanney jiggin' it up at Kells. It was exactly like this, only different.

Back to present day.

Or rather, last weekend.

Elle and I spent a while avoiding any and all contact with GWNF, dancing with Flanney and Middle Martin. Without making Elle sound hussy-like, I'll just say that she spent some time beating boys off with a stick while I stood close by, ready to leap to her rescue if needed. I'm afraid that what I was actually doing was keeping an eye on her while trying to look like I wasn't which in turn made me look like her creepy keeper. I do believe that I ended up catching the eye of New Bartender (we'll call him Bernard) for this very reason, but once we chatted a minute I'm pretty sure I put any of his fears to rest.

Bernard: [polite] So. You doing alright? I noticed that guy seemed to be bothering you both earlier.

Me: Nah, I'm fine. If anyone touches her, I know how to judy-chop pretty well.

Me: She's my sister.

After a bit, I noticed that Bernard seemed to be keeping a watch over us which was really nice and I'm positive that it had nothing to do with my hot sister. It was kind of cool being part of the Bartender Protection Program. When GWNF showed back up and trapped me against a wall, Elle managed to convince GWNF that we were scoping out two hot guys next to the fireplace and if GWNF could just go away and do a drive-by, we'd appreciate it so much. GWNF managed to get in a pretty disgusting story about his co-worker's brush with bestiality and how GWNF was really cool because instead of being grossed out (which I totally was, by that point) he instead asked what breed of dog it was. My face was pretty screwed up in disgust which led GWNF to inform me that I could do worse than him in that bar and that was pretty much when Bernard came to our rescue and GWNF disappeared.

Sometime after, I noticed the bartop on fire. I tried to nudge Elle, but she was busy dancing with some Brazillian guy ("he smelled ah-mazing, Em!") so I just stood there watching things burn until I realized Bernard was making drinks and lighting them on fire. Dangit. Can you imagine how cool it would have been to have 35 firemen flood the bar? A dream come true, that's how cool.

I sauntered over (I'm absolutely sure it as as smooth as I think it was) and watched.

Me: Hey, if I get a refill on my water, can you light that on fire, too?

Bernard: Does your water have alcohol in it?

Bernard was making a Spanish Coffee and offered to make me one. The first sip? Awesome.  It's just like coffee, only better. The second sip? Disgusting. I swear, that thing must have been 100% alcohol.

I abandoned the coffee (which Elle managed to discover and polished off rather quickly) and stuck to water.

About this time, we met Bernard's friends and ended up hanging out with them. One of them could have been my twin's twin.

My brother Gary tends to make a joke and take it just past horribly inappropriate. This new guy (we'll call him Joe) was the same way. I won't get into details, but there were an awful lot of references to window-less vans, zip-ties and dark roads.

Around the time the bar closed and the lights came on, Huge Bouncer Guy encouraged us to get the eff out. Elle and I decided to leave all on our own accord (heh). On our way out we were joined by Bernard's friends and invited to join them in sampling "the world's greatest bratwurst" just up the street.

Me: [nudging Elle, whispering] Are they serious? Or am I missing a huge innuendo?

I mean, seriously? It was like 2:30am and three guys we just met encouraged us to go hit up an alleged mobile bratwurst truck two blocks away. I just knew they would discover our slain bodies in a dumpster the following morning.

Surprisingly enough there was a bratwurst truck. And they made us get in it. Now, I've had 12 years experience in judging mobile eateries and I was pretty reluctant to climb aboard. I thought I was sly when I just hung out under the awning and almost got away with it until a hand reached out and yanked me inside.

Me: [sliding in next to Elle, whispering] This is where they gut you and ground you up in the sausage roll. We've got to get out of here!

Elle: [oblivious] Hey, this is Anna. She owns the truck! Isn't this COOL?

Me: [eyeing Anna, who by the looks of it could easily kick my butt] Uh huh...

Anna: [eyeing me] Where the heck did you come from?

Now, you all know I didn't die and end up as a 3am feeding to drinkers, because how else would I be writing to you? Unless... UNLESS it was from beyond the grave! Spooky.

After enjoying our bratwurst (actually, they were AMAZING) and hanging out, we started back to the car. Two of the guys decided to walk back with us which was pretty nice since I had no freaking idea where we were. One thing I didn't mention earlier was that Joe was referring to zip  ties and the windowless van in every other sentence. I'm fairly certain he had plans to murder us and Elle was certain it was our brother Gary's long lost twin (the other one). I wasn't so sure that I wanted him to accompany us to our vehicle, not because I was actually afraid of him, but because I think he was mildly in love with Elle and wanted to clunk me over the head with something and steal her from me. No one steals my Elle! No one, I tell you! I need her for doing dishes and washing cars. I'm pretty sturdy, but it was cold and I didn't have a coat. It's hard to defend yourself when you're shivering.

Upon reaching the 24 hour lot where my car was parked, we discovered a locked and dark booth where the jerkwad operating the joint apparently abandoned ship AFTER keeping my keys.

Both Boys: COOL! Need a ride?

We called all of the emergency contact numbers listed on the sign that was hung right next to the "24hour parking" sign, but no one answered. I vowed to kill someone and Elle vowed to use the parking garage around the corner next time.

We finally caught a ride home (20 minutes away) and had to drive straight back to get my car (with my spare key) because apparently the 24 hour ticket I bought that night at 9pm would expire at 6am the next day. Makes total sense. I still have to go back and get my original key from some drop-lot where they take all of the stolen leftover keys.

I see what happens when I let you blog without my input. You make me into some kind of sought-after dancing machine. It was not like that at all. The attempts at dancing were met with tragic results - the Brazilian guy made the best of it for a few moments, smiling politely and telling me "'S'ok, you no dance too bad," but after the 4th time tripping him in as many seconds, I fled in embarrassment and he looked relieved. I never knew that it was possible for someone to make a Latin guy dance bad. I should get an award for that.

You did, Elle. It's on your dresser.