We are women. And we do what we want! If that's okay with you.

Duuuude, two of my *friebors are in SO much trouble with their husbands right now. I am completely responsible for one case of Upset Husband. The other is totally not my fault. Directly.

Shenanigan (a recipient of the Snowman Protection Agency) has been telling me for a few weeks that she knows this ultra-fab place where she and I just have to go. She refused to tell me what it was, only revealing that is was not a bar, or strip joint, or anything wild. And for weeks now, it just hasn't worked out.

A few days ago she cornered me in the cul-de-sac and in no uncertain terms let me know that we were hitting up this place before the weekend was over. She had a kitchen timer in one hand and a baby burp cloth in the other. Let me just say, I didn't know what she was up to, but she was holding both of those items in a very threatening manner. Shenanigan is a crafty one.

Shenanigan and I tried to get out of the house Thursday, but that venture was thwarted by my 10s 5th grade colonial program. Apparently you are considered a bad parent if you try to drop your kid off and run (kidding! I don't run).

Shenanigan and I eventually hammered Sunday evening into shape and invited Rawr along (for entertainment). Um, remember back a few weeks ago when I briefly mentioned that I was afraid that Shenanigan and Rawr would attempt to exact revenge at Elle and I for ditching those two in the city? I didn't really give details then, but I have carried The Fear of revenge in my heart every time I see the two of those ladies. And now that Shenanigan and Rawr were about to have me alone without a single witness I was fairly certain that Sunday would end with me arriving home at 3am wearing torn leggings and with mud in my hair. Which is weird because I do not own a single pair of leggings.

Shenanigan, Rawr and I cruised downtown and ended up at this neat-looking Sushi place. I say neat-looking because we didn't go inside on account of it being closed and all.

Shenanigan swore she thought they were open later than 9pm and was apologizing profusely for her so-called error. I assured her that the sushi bar couldn't possibly have handled The League and it was better off that they had closed early.

(One of these days I will actually get around to explaining The League. Again, that day is not today)

The three of us knew that after all of this work to get this trip to come to fruition, we couldn't just go home. After all, I had done some mad finagling to stick Elle with the five kids, and Rawr and Shenanigan most likely had to make "promises" to their husbands in order to flee their respective habitats.

We were going to enjoy our night, dagnabbit. I may have also promised Rawr's husband that we would be back before eleven o'clock, that we weren't going to any bars or shady places and so we had to do something.

You know where this is going, don't you? Yes. Kells. My favorite pub.

The three of us made it to the pub, which was relatively quiet on that Sunday night, and we enjoyed our dinner and a few drinks (BTW, have you ever ordered a Malibu and cranberry without the Malibu? Exactly. Because no one does that. I stand my ground that the server wasn't paying attention) and shared a lot of laughs. We had to stop in at another place right near by because I wasn't ready to go home yet. Some people call this kidnapping. I call it coercion.

The Other Pub: Where, upon entering, the very Fly-For-A-White-Guy bouncer (about 5'4 and 120 lbs) leered at the three of us and said very provocatively and gangster-like, "Yeah, girlz. Git yo asses on up in heah." You can imagine our surprise when he followed us in and asked for our drink order. Apparently, things aren't quite "happening" enough at this dive to employ both a bouncer and a bartender.

We did manage to capture a photo of us in THE smallest bathroom. EVER. 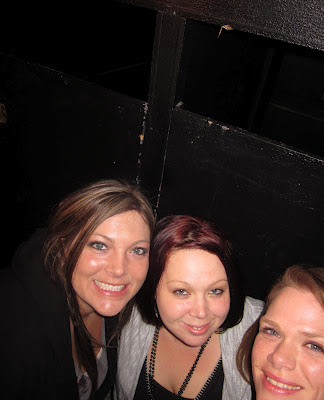 Yes. My self-photographing skillz are mad.
Shenanigan., Rawr and Self. 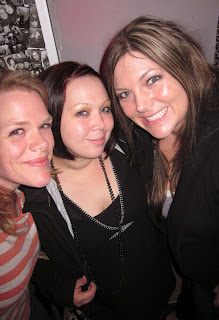 If I could stop accidentally avoiding Shenanigan today, I would totally post the hideous photo booth snapshots we took. In one of them, my chin resembles that of the Joker.

We managed to keep ourselves in check. Shenanigan gave out some free medical advice to the fly-bartender, someone brought their dog in (complete with sweater and matching leash) and we confiscated the juke box in order to play a ton of never-before played songs from your grandma's era.

And then we each went home at 2am to face the music.

Well, I went home to this: 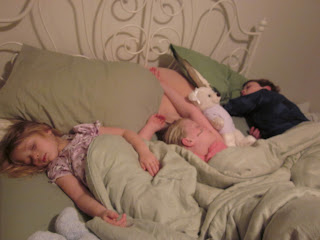 Cute little twerps. Apparently "do not crawl into my bed while I'm out" means
"please, hog my bed. I'll sleep in your twin size bunk bed."

Rawr and Shenanigan went home to defend their freedom. Thank goodness they have amazing husbands that love their faces. And as soon as I see the men, I am going to rally for their wives and lay claim to this mess I made. Just hide the kitchen timer and burp cloth.

** On a side note, I am about to do the wildest thing in my life. Erm, wildest normal thing. I am going to get in my car and drive away for the next two days. (Worry not. Mumsie has my kids. They aren't quite ready to handle living on their own yet. YET.)

Where will my travels take me? I do not know. That is the beauty. It's just going to be me, Elle's car (better gas mileage!) and my thoughts. Because she doesn't even have a CD player in her car.

See you in a few days.

Can someone please set aside some bail money? Just in case. If I go north to Canada, I'm a little shaky on the rules up there. Which side of the road do they drive on, and are you allowed to text and drive? On the other hand, if I head west toward the coast, I may never make it back.