The other night, Elle baked a cheesecake.

I hate it when she does that because I am forced to consume copious amounts of it in order to get it out of the house so that I don't eat it. Can you see the stupidity in that? Yeah. But it's how I roll. Thank goodness Elle doesn't bake all that often.

Elle was kind of having a bad night whilst trying to create the cake of cheese. She had to run to the store for last minute ingredients, she forgot to let the cream cheese reach room temperature before she added it to the mix, etc. Elle is a bit high-strung at times (and that is putting it nicely) so she was pretty irritated by the time the cheesecake was in the oven. I would like to mention that she undertook this culinary task at ten o'clock that night.

I was researching world peace watching television and not paying any attention to her, which I've become pretty adept at doing.

Petey was running around the house attacking the air and invisible ninja-bugs.

Elle slammed the oven door and said something about-- well, I don't even know because as I said before, I had tuned everything else out besides Psych.

I do remember hearing Petey drink an awful lot of water for a while, but I didn't care enough to get up from the couch and investigate. I figured since he lives in a house with five kids and is constantly being chased and made to wear doll clothes, he is entitled to re-hydrate to his little kitty-heart's content.

You know those horror movies where the girl is sitting on the couch trying to recoup after a hard day of wrangling multiple kids and she just wants to veg and watch James Roday emanate gorgeousness? And there's some creepy-butt person standing in the doorway and you just know it's a small matter of time before the girl on the couch looks up and manages a huge scream of terror right before she gets jacked up? Yeah.

So I look up and Elle is standing in the doorway to the living room with her demon-brown eyes boring holes into my person.

Elle: Your effing cat is eating the cheesecake. 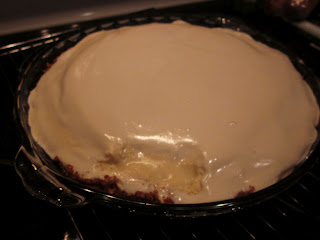 I offer a timid smile while I panic and try to think of a way to fix this. Elle's eyes darken further. Crap. I manage a look of disdain toward the cat. Elle seethes. I rise hesitantly from the couch and peer over at the counter where Petey is happily lapping up cheesecake.

And I stand there. What. Sometimes when I make the wrong move she hits me.

Granted, I usually deserve it.

Okay, I always deserve it. 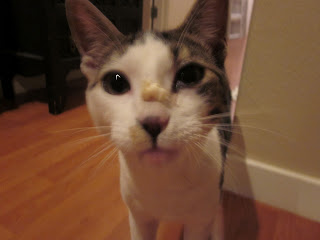