A few weeks ago when I flew back home to visit, I left my three kids with my sister, Elle.

I have yet to trust her ever, ever again.

Apparently, being relatively new to parenting, she does not get the fact that mothers SO do not like it when they go out of town and return to find their last baby riding a bike sans training wheels.

I suspected that it would happen because the Friday before I left I had both of the 5s outside on their bikes without trainers. I was holding their seats and helping them along, but I must admit I was kid of half-arsing it because I didn't want my 5 to learn while I was gone. I knew she wasn't quite ready to master the art in one day, so before I left I instructed Elle not to let them ride their bikes (I'm all about couch potatoes? Heh. Don't judge me).

Upon landing in California, I checked my phone to make sure Elle hadn't burned the house down and I got this:

And the last text of the day:


When I arrived home Monday night, all three kids flung themselves at me in a burst of chatter and activity.

I hold true to the fact that childish behavior wins every time.

The next day, my 5 jumped on her bike while I took a video of her very-first, never-before seen maiden bike ride. I will admit that I had tears in my eyes. I missed so many of my kids' firsts when I was slaving away at the restaurant, but I had managed to catch the older two riding their bikes for their first time (not too many opportunities for solo-cycling in daycare, I suppose). And now, all remnants of my 5's toddler-hood are fading before my very eyes.

The next thing I know, she'll be in college dating some freak with lip piercings and black jeans riddled with safety pins (uh, yeah. My kids will not date until they have graduated from high school. You might be thinking "Yeah. Good luck with that." Why, thank you.)

I may have also inadvertently taught Rawr's 4 how to ride her bike the other day while Rawr's husband was at work. BUT. I tell you what, that kid had never even sat on a two-wheeled bike. How was I supposed to know that she would just lift up her feet and take off down the street?

On the other hand, the 62nd Street Biker Gang is coming along nicely. 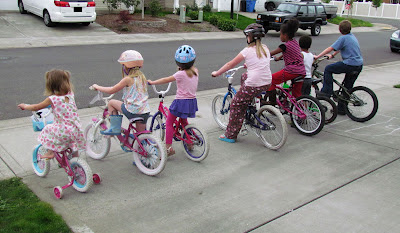 that is one awesome bike gang but why oh why are their children without helmets?

This photo may have been staged. Also, two of them are not mine. The end one got kicked off his bike because of his refusal to wear a helmet.