Things in the neighborhood are heating up, if you know what I mean. There's a lot less clothing, which means a lot more skin, and a ton of whistling.

You know, like the weather has turned and stuff? Kids are in swimsuits, workin' on their tans and they're happy so they whistle. What were YOU thinking?

Then again, this is the PNW, so I'm sure that I will wake up tomorrow only to be greeted by snow and a hurricane.

But, today Rawr and I spent the day sunning ourselves (personally, I would not recommend being clad in jeans and a cardigan during a PNW heatwave of 65 degrees, but I did try to tan my ankles. Didn't turn out like I thought it would), catching each other up on the neighborhood events this past weekend (um, I came home to "way to bust a drill bit" scrawled across the sidewalk in my yard. I'll let you guess who did that), and threatening the 500 kids out there that we could too catch them, so don't yell neener neener when we tell you to knock something off.


Rawr brought up the fact that she hates the hideous shrubs in her yard. We both stared at them for a bit, contemplating the situation at hand. Well, I imagine that Rawr did. Personally, I was trying to decide if it was worth the effort to go inside and see if I had the ingredients for margaritas, but then I remembered that I don't keep alcohol in the house and that even if I did, I have no idea how to make a margarita. From there, I decided I could very well maim something for a Pink Sparklie. But, seeing as how I didn't know how to make one in the first place and Adam and I are still not on speaking terms--- see? This is how I get off topic. This is also how I got off topic with Rawr and only came back to reality when I heard a motor).

My head turned toward the source of the revving. Rawr's house. Hm. Curious, I got up from my spot on the porch and meandered over to Rawr's.

If I could tell you one thing about Rawr, it's that she is one of the most real people I know. She doesn't mess around, and I love her for that. 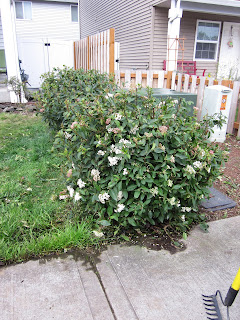 She did get the shrubs in order. I helped by getting that rake stuck in the bush so many times that I eventually just started hitting the branches with it. 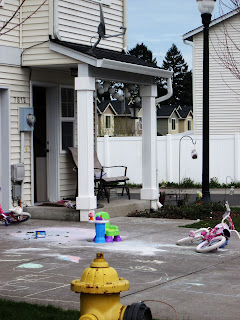 And then I left to go clean up my driveway. I won the neighborhood White Trash/Abandoned Lot award today. Yay me! I would like to thank the makers of sidewalk chalk. I would also like to ask them how to get all of that dust out off my hardwood floors.
Posted by Unknown at 6:18 PM