Yesterday our worlds ended when we met Dre, the thirty-something guy who detests chicken. I suppose it would have been kind of me to encourage y'all not to storm his house with pitchforks and burning torches, except that someone needs to get through to him! I'm baffled. How do you not like chicken?

Elle and I pondered this quite heavily for a few days. Recently, we came up with a plan. We'd just get Dre a pet chicken and through caring for the bird, he would grow to love poultry. That, or dealing with rooster poop would cause Dre to loathe the foul (fowl?) friend and Dre would eat his feathered foe out of spite, causing him to enjoy this delectable meat.

There aren't many farms in our area, and with the threat of foxes out in the country, Elle and I opted to visit our local feed store, The Horse Trough, posing as farmers who needed a fresh crop of chickens.

We wanted to look the part, so we borrowed some of Mumsie's flannel shirts, stuck our hair in braids and slapped on some flip flops (um, we don't keep mud boots here in the city, so we opted for air conditioned footwear because it's hot in the country, right?).

Upon entering The Trough we were greeted with the stench of hay, animal fur and licorice.

Me: Look, Elle. Black licorice. How sweet is THAT?

We headed over to the counter where a man in green bib-overalls was standing, watching us.

Farmer: Can I help you?

Me: It's for dinner. Do you carry any corn on the cob or grits? [whispering to Elle] Do we need any hay for Bessie today?

At this point, Farmer is looking pretty skeptical. I decide to dial it up a notch.

Me: Bessie's got consumption. We're not sure she'll make it through the night.

Elle: [kicks me] She means that we'll just take one chicken. Dr. Dolittle will be by later to check on Sally. Er, Bessie. Ahem.

Farmer: [crossing arms] Dolittle? [jerking his thumb at me while I try to blend in with a stack of hammers] And that one is licking rope.What's going on here?

Me: [muttering] I thought it was candy.

Seeing that we've been caught, Elle lays it all out on the table. She tells Farmer about Dre, his aversion to poultry and our quest to right this terrible wrong. All the while, Farmer keeps his face a perfect blank slate, which is hard to do because Elle was going into some intense detail. Right about the time Elle was explaining that the poor economy was directly linked to Dre's hostility toward barnyard fowl, I interrupted. I told Farmer that Elle and I were interested in mailing chickens to California and could he help us or not. Farmer refused, so we asked if we could crate the bird on a train, like in the olden days. Elle pointed out that there aren't any steam locomotives left in these parts, and I countered that the chicken wouldn't know the difference. Farmer informed us that chickens weren't in season anyway, so I asked if he had any contact with the East Bunny and whether the rabbit would offer us a discount if we picked it up ourselves. It was around that time that we were not-so-politely asked to leave.

Elle and I tried all three feed stores in the Tri-County area and each time came away empty handed. Well, except the last one. We got a free sample of hoof wax just for coming in.

Elle Googled "chickens in the PNW" and got a few hits. We took a trolley over the bridge and downtown to the Wednesday night market in order to meet with a medicine woman but it turns out she just sells chicken blood for potions. I know what you're thinking. Outside market? In the winter? Absolutely.This is the Pacific Northwest. If we waited until summer, we'd have a 2 week window before the rain started again.

While we were down there, we met up with some homeless dudes. Elle and I took them down to the pub and played some shuffledboard with them, treated them to a few beers and hoped to score some inside info on a local chicken smuggling ring. Only, Elle and I didn't know how to play shuffleboard. Elle tried to look up the rules on her phone, but her battery was dead so we used soccer rules and hoped no one would notice. They didn't. They were also plastered, so that may have been part of it.

Realizing that the Chicken Quest was a failure, we finally left for the trolley station. Elle suggested one last stop at a mini mart just down the block from the trolley stop. Guess what was sitting at the register? 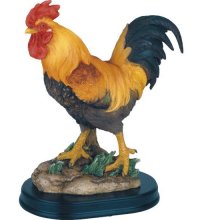 Billy the Rooster. Elle tried to bargain with the cashier, but it seems that Billy was a family heirloom and that he was not for sale.

Who in their right mind does theses two things: A) Chooses a rooster as a family heirloom and B) keeps their heirloom on the counter of a convenience store?

I mean, Billy should have been adopted as a member of the family and then proudly displayed on his own shelf. He needed a coop and maybe a harem of chicken b*tches to keep him company.

Billy had none of this.

Elle got all mad and motioned to me with one finger that we should go. I misunderstood and returned the motion. Elle motioned to me to stop motioning because the shop keeper was motioning for us to get out.

We loco-motioned out of the store and walked back to the trolley station.

Elle: That was a bust.

Me: Yeah. You need to work on your gesturing.

Speaking of Chickens, has anybody seen this? The Bloggess is one of my favorite sites. Check her out! Only, promise to come back because it gets lonely over here all alone.

Know who has a family chicken?

Mom. I get it when she dies.

(Oh, strangers out there? It's cool, we're not callous. We all just want to make sure our things are appropriately portioned out. See, we're trying to avoid postmortem arguments. It's not just our parent's stuff we're divvying up. We've all staked a claim to any given expensive thing each of us owns. I get Gary's TV and beer collection. Wait. Let me rethink that. I get Gary's beer collection and TV. Yeah. That's better. Em gets my kids [sucker!!] and Gary's truck. Neither Em nor I have anything good to offer, on account of us having kids, so no one fights over our stuff. It's better that way.)