It was a Flogging worth waiting for

I think I'm getting used to this whole lack-of-sleep thing. I woke this morning to shades of grey (rain) and Mumsie hollering at me from the bottom of the stairs. For a second, I thought I was back in high school. I almost panicked because I didn't remember doing homework the night before and I couldn't figure out why I smelled like Capri-Sun Captain Morgan.

And then it came flooding back.

Gary and a couple of his friends joined us for the concert in the city last night. They picked Elle and me up in a party bus (which is, apparently, how the United States Air Force does things. I would have expected an airplane, but whatever. Maybe Gary's truck was in the shop). 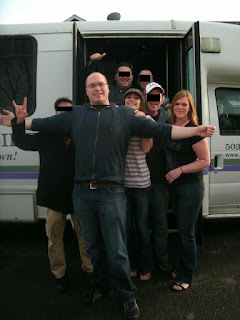 Blogz, Gary, Blank, Elle, Blank, Blank, Blank and ME!
I'm not really sure what me and my huge arm are looking at.
Also, doesn't it look like we're all about to head off to Bingo in our Medical Transport Bus?

** I realize that some of my posts lately seem to involve me, Elle and excessive drinking. And by excessive, I mean three times in the last 8 years. I'm not an alcoholic and I don't need a meeting. I just enjoy going out and being around with people who are over the age of ten. Roll with it.

In this state you get your liquor at a liquor store which is closed on Sundays, so after waving good-bye to our children, we sped off to the local grocery store for a few Road Sodas (I'm pretty sure Rawr was online last night nominating Elle and I for Parents of the Year as we drove off in our Party Bus).


I did find these really cool Captain Morgan freezer sipper thingies (much like Elle's margarita mix that I stole). This is a bit of a secret that I like to spill the beans about at incredibly inopportune times so listen up. I kind of dislike beer. A lot. I know. Sister of the Beer Connoisseur prefers her hard liquor. I just can't handle the carbonation. That, and it's totally gross stuff. I much prefer the Cap'n Sips, which apparently I was calling Pirate Bay all night.


I thought we were going to grab a case of beer for the boys and be done with it. Um, I really wish you could have seen the cashier's face when Gary, Mikr and I sauntered up with cases upon cases of beer towering over us. I forgot that these boys are drinkers, so we pretty much cleaned out the cold case at the store.

We'll just skip over the part where we returned to the bus and had a little scare when my brother and sister SEPARATELY shimmied on the stripper pole, the stop at McDonald's for a straw because I don't like alcohol touching my taste buds and we'll just get to the concert.

A few of the guys didn't have tickets, so we ushered them off in the bus as we crowded into the venue.

Ah, it was like cockroaches scattering in a single-wide trailer back in Mississippi. I think I blinked and everyone was gone. I went to the ladies room and looked for Elle. No luck. I kind of hung around the men's room trying to look like I was looking for something in my purse. All that got me was one weird look and two job offers. Ew.

I finally located Elle and Gary near the entrance. We scrounged up a few more from our group and hit the line to go upstairs. Let me share this with you:

It is one thing to ingest alcohol in large quantities and then stand in line for about an hour while trying to make nice with the guys in front of you so that they'll let you cut in line. It is another thing entirely to take Elle and have her walk by and watch the line part like the Red Sea. It's why I bring her along. After the chick with the stamp covered my entire left arm in kiddie stamps (seriously, it was a stamp of two kids holding hands. What is that? Birth control for the conert?) we made it upstairs and settled ourselves right in the walkway near the bar counter. Have you met Gary? He's like 7 feet tall (no joke) and he goes where he wants. Or stands where he wants, for that matter.

The concert was supposed to start around 7:30pm with some band or another opening and then another band playing and then some silence and a whole lot of Dude, where's the freaking group we paid money to hear? I think it was close to 10:30pm when Flogging Molly finally came out and played. It was loud, it was awesome, it reminded me of when Elle and I went there to see Bush (OH! Remind me to tell you about that some time. Liz totally missed out on Gavin Rossdale's sweat. Stupid me).

Elle and I totally bonded with some guy and his girlfriend over some other guy's terrible choice in skinny jeans, ballet flats and huge mohawk. I wish I'd brought a camera to capture that look because it would scare children.

I am fairly certain that I could leave my life and become a concert junkie (NOT the gross kind). I kind of like this whole go-out-in-public-and-have-a-life thing I've got going on.

St. Patrick's Day is coming up this weekend and I kind of wish I was going to be in Ireland this year. It's been four years since our visit and it's just one more year until we go back.

I wonder if they have Cap'n Sips there.
Posted by Unknown at 8:07 PM