Elle and I, when left to our own devices, will generally create some kind of situation. Sometimes involving cops, other times firing people who don't work for us. It is what we do.

Tonight, for like the first time in a looong time, Elle finally had an evening off from work. She holed up in her room playing lame video games while I scrubbed the floors and cleaned the gutters sat on the couch and thought about all of the things I should be doing but wasn't.

Around the time I dragged myself into the kitchen to make dinner, Elle wandered in.

Me: [pointing to fridge while flipping through a magazine]

Elle: [opening fridge] Are you kidding me?

Elle: If you're going to grocery shop, can you do it with a little less... force?

Me: [standing beside her and reviewing the contents] I just got the stuff on the list. Check it out. 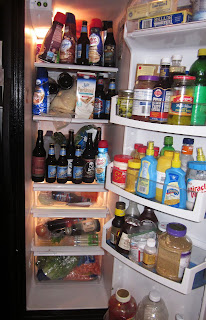 The creamer is mine, the beer is hers.

Elle and I agreed that we had some crowding (you can't see them all, but there are actually 7 bottles of creamer and about 70 bottles of beer. Check out the crisper). We decided to plug in the garage fridge and move some of the surplus out there.

I was sweeping while Elle was standing around talking about how inefficient some people are when I decided that maybe she should sweep. I got her back pretty good because I'd just murdered a spider with the broom and when she saw its little ugly carcass she ran around the garage screaming like a howler monkey. 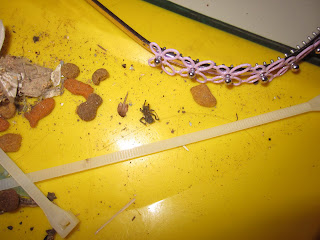 Can you even see it? It's totally not big. Don't mind the cat food. That's just there for perspective.

After I died laughing, I told Elle to start moving the fridge while I cleaned up the midget spider body. 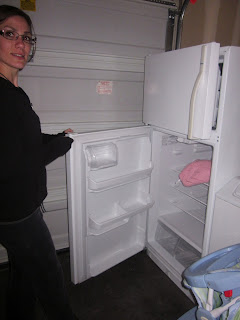 Elle: What is a baby blanket doing in here?

Me: [shrug] Probably the little girls. Or where the spider lived. Just yank it out so we can move it.

And that's when THIS happened, yo. 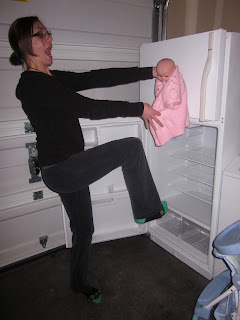 HA! I totally knew that thing was in there all along!! 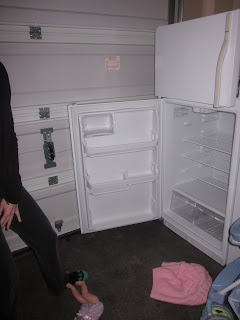 Geez, Elle. You don't have to get all Chuck Norris on the toy.
It's not like the Chuckie doll that comes alive and eats your face.

Eventually, I stopped making fun of Elle and talking about what a big fat BABY she is, and the fridge was moved. 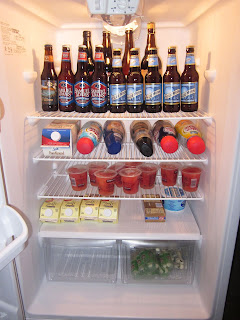 Lookie! Surplus Fridge.
Am I the only one that noticed Elle has her beers all separated by label and height?
Fah-reek!

Yeah, it totally happened that way. Except that I just send Em to the store for more beer.

seriously, how much creamer do you need?

I would hope that you did. As much as I find Blue Moon to be a palatable substitute for GOOD beer, you need some better stuff in there. I'm currently going through a Deschutes phase. Also, the Pike Brewery has some delights out there. I recommend the Kilt Lifter or the Monks Uncle. Anywho, Know that your Bro is proud of both you bitches for separating your habits from the communal fridge that the kids use. Way to hide your shame.