What do you get when you cross two incredibly attractive girls with tool belts and a 900 pound cardboard box?

We don't know either. We had a hard time finding any pretty chicks to help us.

What we did have was Elle and me carrying a ginormous box of wooden boards up a flight of stairs while the cat tried to use us as an obstacle course. I'm starting to think that animal has something against me. 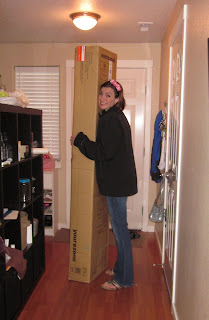 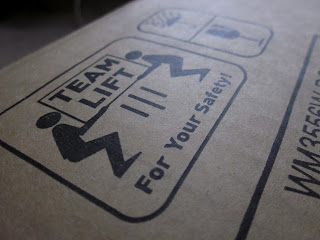 In the interest of safety, Elle and I decided to use our brute force to propel this up the steps. That box was so freaking heavy that there was no way we could lift it quite that high in the air. 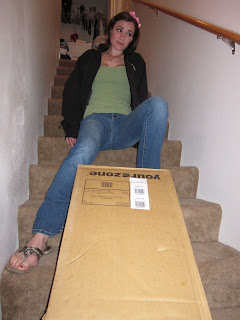 Boy, is Elle going to love this photo!
Also, just getting this beast up the stairs cost us each $1.50 in my 9 year old's swear jar. She's saving for her trip to Ireland when she turns 16. I plan on using those funds to send her to summer camp. 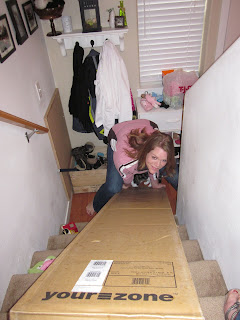 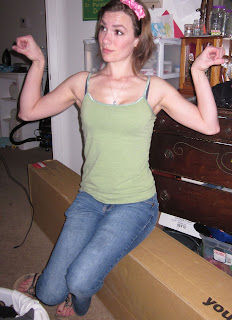 Eventually we got it into the correct room and twelve hours later, Elle had it no where near put together. Around 11pm I heard pounding coming from upstairs, so I sent Elle a text from the couch.

Me: Do you have Phineas and Ferb up there with you?


Elle: Yes. We're building the most poorly constructed piece of shyte to ever leave Vietnam.

Me: Eight year old kids aren't really all that good with power tools. You could build a rodeo pen and charge admission.

Elle: I'm about to turn it into a fecking bonfire.

Eventually I tuned out the hammering and use of power tools and fell asleep. The next morning Elle had a set of bunk beds and $14 in the swear jar.

If I hadn't been busy re-drilling holes because the originals were a solid two inches off course, I'd have photo documented my painstaking victory. It wasn't pretty, especially when my attempts to stack the beds was foiled by tiny cars placed in the peg holes by tiny a 3 and 5s.

That was a hard won victory. I'm never building again. I'm outfitting every boy I know with a toolkit and an emergency cell so they can come rescue me if ever I need to construct something again.

Victory apparently comes at the cost of good grammar.

I don't know what you are referring to. Also, there is a disclaimer on my profile. Blogz with a Z.