Last Saturday I made some bomb-diggity Guinness Cupcakes in honor of St. Patrick's Day. 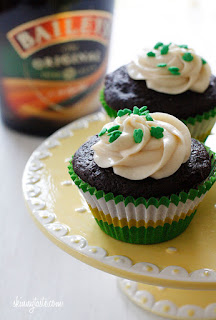 Actuallly... I cannot believe that I didn't tell you guys about it. Did I? Hang on.

Oh, yeah. I posted the recipe to Facebook. Not Eloquence. Sorry peeps!

Here's the link. Gina is the creator of the website skinnytaste.com and she does an ah-mazing job creating low-fat recipes. Seriously. Every single recipe I've tried has turned out to be my new favorite. I'll starve to death if she ever shuts down her site.

I made the Cake Bombs (renamed by moi to sound more like Car Bomb) as a bribe for Mumsie to watch all 5 kids while Gary, Elle and I went out for Patty's Day. I also made them for my dad (because who DOESN'T secretly enjoy getting their hard-core Mormon dad to unknowingly ingest beer?).

I sort of really enjoy baking. And I used to do it all the time before I realized that yummy baked goods equals a thickening waistline.

Elle does not bake. Except for Flat Chocolate Chip cookies (she says it's her recipe, I say it's something she's doing wrong). She only makes them once in a while and when she does, it's schforteen-teen dozen and leaves them all over the house as some sort of really rude eating trap for me.

When Elle moved in with me and we created The Chaos House, she brought her baking ingredients.

Let's take a pause here while I give a bit of background.

Mumsie is older than us (obviously). We won't call her old because she'll stop coming to visit us, but we will say that she doesn't find strict adherence to expiration dates entirely necessary. Coming from the food service industry, Elle and I will toss something the day before it expires because we have taken the food safety courses and we know what can happen to spoiled food.

Elle always freaks out when she finds something expired at Mumsie's house.

Elle: MA! You can't eat this yogurt! It expired yesterday!

Mumsie: I've been eating that expired cottage cheese in there for a week. It's fine.

When I started gathering the ingredients for the Cake Bombs, I noticed that there were two open containers of baking powder in the cupboard. I checked the expiration dates to see which I should use first.

And, dear readers, do you know what I found? 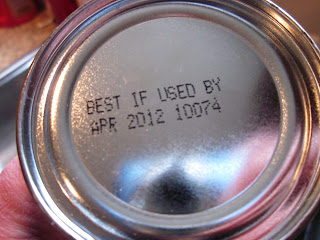 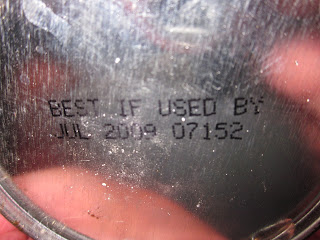 In. Your. FACE, little sister! BOO-YAH!

No wonder her cookies came out all funny (and delicious).

That's all. I made the bombs, they were good, and now I have created a surprise Bake-Attack on my little sister via the internet.

Things are never normal around here.

I also have three leftover Cake Bombs if anyone wants one.
Posted by Unknown at 4:37 PM

I'd like to take a moment here to defend myself. Remember the two batches of cinnamon rolls I recently made? The ones you ate a pan of before I got home from an hour and a half long shift? Oh. Right. I bake, I bake more than you! I also baked a batch of mumsie's rye bread. And by "baked" I mean "ruined because I haven't been baking it for the last 50 years and don't have the skillz that mumsie does"

And seriously? How did I let that happen? I swear I bought new stuff like a year ago.
Also, yours is going to expire in a matter of weeks. Get your butt in the kitchen and bake me delicious treats!

I'd forgotten about the cinnamon rolls. And I did NOT eat the whole pan. Some pieces of them got stuck and I couldn't chip them out.

um are there still cake bombs?

You bet. And if we ever see each other again, I will give you one.