Me? Well, I am fairly certain I've lost my mind the last few days. I keep waking up from these really terrible dreams that involve me trying to stab my cat and other people trying to stab me.

I'm not going into major detail here because we all know how annoying it is when others want to share incredible details of their slumber. Personally, I want to off myself.

My first dream started off fine. I think I was hanging out with family. The dream ended with me apparently needing to stab the cat with a pin in order to break his spirit free because he was supposed to save the world. It reeked of Harry Potter, which is weird because I have never caught more than 15 minutes of those movies at a time. Ever have a dream where you are trying to sock the sh*t out of someone and if you manage to make contact, it is with about as much force as a newborn kitten pawing at the air? Yeah. That was how effective my kitty-slaying went. It ended with me waking up with my heart pounding because I thought I had just met my alter personality, Melanie, for the first time and she/me is a murderer. I started re-evaluating my childhood pets and checking my memory for unexplained pet disappearances.

Then, last night I had a dream that some gangstas were chasing me through the high school parking lot trying to stab me. None of the teachers would help me and everyone kept laughing at me because apparently my terror is just freaking hilarious. Eventually the gangstas caught me and started poking the backs of my hands with their pocket knives. I did manage to punch one in the face (mew, paw) before James Roday saved me. Then, we ran off and got married and didn't invite Elle because James Roday and I are in love.

When I woke up, I realized that the stupid cat had been clawing my hands. I'm sure he had been trying to save me from the dream, instead of sending horrific messages to my unconscious mind.

Nice to know that I almost made an appointment with a shrink because I thought I was losing my mind and not because my effing cat likes to shred my hands while I sleep. 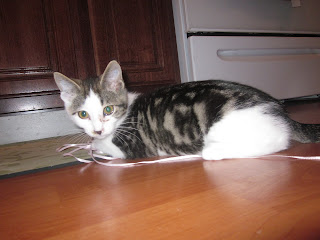 umm, pic of the shredded hand?

I can't show it. My winter skin is very dry and geriatric-looking.