In the true spirit of the PNW, the weather has been a bit dodgy lately. Rain, snow, rain, sunshine, RAINRAINRAINRAIN. In an hour's span.

Right around the kids' bedtime (and subsequently the same time I about lost my shite after being cooped up in the house all day and then dealing with three kids who think slumber is an option) it started snowing. Again. You may remember that we were a bit worked up about the weather earlier that day. But this was the real stuff.

I was in the act of threatening my youngest child with bodily harm (Booty-Swat!) when the eldest yanked up the blinds and declared that since it was snowing, everyone could stay up and watch the flakes. I adore his effort to take charge and be a leader in the Revolution Against Bedtime, but not on my watch. He can save that crap for his dad.

I allowed them to check out the pretty fluffies falling and then gently reminded them that it was bedtime ("a pissy mommy is a scary mommy!" Naw, I didn't really say that. I actually refer to myself as The Enforcer).

For two hours I struggled with children yanking on blinds, throwing every sheet, pillow and blanket off the bed, in&out&in&out of bed and ohmygawd would you JUST GO. TO. SLEEP.

A moment to inquire: WHAT is it about my children and bedtime lately? Do YOU know? Because I'm at a loss. I never used to have an issue with them. Well, a real issue. Yet all of a sudden they're completely cracked out when eight o'clock rolls around. They're trying to kill me.

Elle had just returned from her shift at The Eatery and expressed a desire to take a walk in the winter wonderland. I invited myself along. Our neighborhood is pretty tough. Lots of friendly cats and people who wave hello. No one is safe out there, especially alone. Um. At 10pm. Anyway.

We bundled up with scarves, gloves (me, not her), etc and set out to roll a snowman.

We made it about as far as my yard when a rumbling in the distance stopped us.

Me: [listening] What the crap is that?

Elle: [rolling the body of the snowman around in the street] Probably the jack-tard that drives by every night in that truck.

Me: Four of them? It sounds like four of them. I'm pretty sure it's--GAAAAAAAAAAAH!!

Because right about that time, four guys driving quads came sliding around the corner two blocks down. I'm not even sure that words can properly convey the scene. It was like a biker gang of snow people on quads, all of them doing some kind of swirling/skidding dance on wheels and they were getting closer. I knew that I was going to get run over.

Elle: [gauging the distance between the quads and our bodies] Nah. We're good. Roll the middle part.

I watched the guys careen toward us and closed my eyes, silently offering up a prayer that if the Wheelers ran over me, God could spare my face for identification purposes. The group did this whole showy-offy circle thing about two feet from our bodies while we cowered in fear, then they took off down a side street. I waited until I was sure they weren't coming back before edging toward Elle.  I decided that we needed a Snowman Militia. We would surround ourselves with these guardian angels and offer protection to those in need. Unfortunately, there was only two inches of snow on the ground and it was really freaking heavy. We decided two snowmen would offer enough security.

By that time we'd made a pretty sweet snowman butt and gut (you laughed. I know you did) and were moving on to the face. While Elle ran back inside for gloves and a hat, I finished putting the last few touches on the snowman. Unfortunately, it's been some years since I last made a snowman and the whole dang thing fell over when I tried to add the head. I was trying to roll some snow grafts and patch him together when I met our neighbor. For the first time. And I've lived here six months.

Because I was pretty much standing in his yard.

Me: Of course, she's inside right now. I'm not out here all alone. Haha. She's getting-

Him: Y'all are married?

What?! She IS. Besides, I was scared that he was going to lure me inside for hot cocoa and torture.

Elle: [running through the yard and waving various snow gear above her head] Got it!

Me: OHTHANKGAWD. Look. A neighbor. [gesture at neighbor who is staring at us] We're in his yard.

It went on for a few more painful moments and eventually he decided we were bat-crazy and went inside to have more alcohol. Or call the police because two nut jobs were making snowmen in his yard. Whichever.

We finished up our snowmen and gave them the finishing touches, patted them on the head and had ourselves a snowball fight. 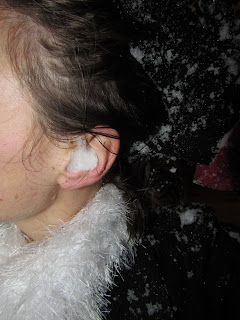 And the Snowmen Protection Agency was in place. 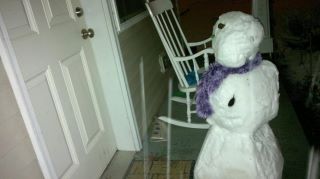 Neighbor One, the perimeter is secured. 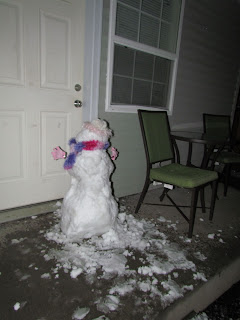 Neighbor Two, I fell apart and have had some surgical alterations.
Also, Man Neighbor is suspicious. Our cover is possibly blown.
Please send back-up. Over.