The Bouncing Death (it's not what you think. Perv)

A while back, my sister's friend had a birthday to which he invited the two of us, plus a crap-load of other people. I'd only met a few of these people once or twice before but they seemed fun. Being of sound mind and age, this guy decided to celebrate at one of those gym-like places that is chock-full of trampolines and foam pits and crap like that. Awesome, right?

My family used to have a huge trampoline in our backyard when we were younger. We were the only kids in our neighborhood to have one and while everyone thought my parents were totally rad, I've come to recognize it was a way for them to keep all six of us outside and out of their hair. We'd spend hours jumping on that thing and never seemed to break a sweat. How much different could this be?

I was totally down for joining these people.

Because I'd never played Trampoline Dodge ball before.

My sister and I arrived and met the group. I was starting to notice that all of this guy's friends looked a bit young. And they were all wearing work-out gear. My sister and I wear wearing (oddly enough) jeans and matching black t-shirts. I'm not old, nor am I revealing my age, either, but let's just say I've begun turning 29 repeatedly the last few years. I'm not terribly in shape, but jumping on a trampoline isn't like running a marathon.You just bounce around like a bunny and have fun.

We all had to sign in as a group which was funny because then we all sat there and waited while the staff signed us in one by one and went over the rules. There was the usual stuff like promising not to break the equipment, to either wear shoes or go barefoot (I went barefoot) and agree not to sue if you broke an arm or died (wait, what?). I remember looking around to see if anyone else was feeling a bit apprehensive. Apparently, I'm a worrier because most everyone else was done by that time and had moved on to stretches and chest-bumps in order to get revved up. I stood very close to my sister and told her not to leave me.

The person in charge of our group reviewed the rules of the game (which apparently I ignored and didn't hear about until I started breaking them later). Then he blew a whistle and we all tromped up the stairway to the platform surrounding the trampolines. I may or may not have held on to my sister's shirt and stepped on her heels a few times. She may or may not have told me to "grow a set."

There were three areas sectioned off into a big "L" shape. The area to our left was a giant trampoline that was sectioned off with edges to form little pods of the trampoline rubber stuff (my adjectives are poor today, people. Did you read my profile? 12 years in front of a microwave. I'm not good at this). Let me draw it for you. 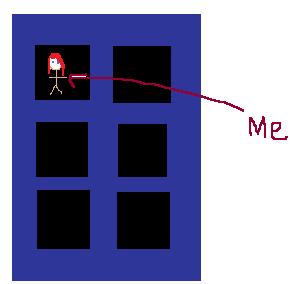 Not exactly to scale.

(BTW, Ideas for Paint Illustrations stolen from one of my favorite bloggers. No. I'm not linking her because I'm afraid you'll leave me for her. Her name is Kristine. Good luck finding her! HA!)

People pretty much jump from pod to pod during the warm-up. The middle section was basically the same as the left and this was where where we played the dodge ball game, and the far right was one big trampoline with a foam pit running along one side. No way was I jumping into a pit of foam blocks. I know my own luck and the odds of me coming out of that with my jeans still on and my shirt where it belonged were slim to nil.

We warmed up for about 15 minutes or so, then we started playing the game.

We broke into two teams of 7. The basic rules (so I thought) were: Throw the ball and aim to hit someone. Don't get hit. And then all hell broke loose. There was a whole lot of yelling and laughing. People were telling me that I was out and I had no idea why. Someone got hit in the face (twice!), someone else did a face plant in the mat. These people were mother-freaking competitive. One guy was running all over the place like a monkey on speed.

This is it, I thought. There's going to be a headline about rubber balls to the face and my photo will be on the front page.

There is video evidence, but I hardly know the birthday guy and I'm afraid that if I steal his video and post it along with 15 other people's faces on the internet without their prior consent that they will come after me. And I cannot run fast.

Because of an injury sustained from saving a baby from a burning building not following the advice of a chiropractor, I have minimal strength in my arms and shoulders. I'm a wimp, despite my Yheti proportions, so you can imagine how many people I tagged (Two. In an hour)

By the end of the hour, every. single. muscle IN MY BODY was screaming in protest. It was awesome.

It's been over two months since Tramp Dodge (you like that, don't you? Freak.). Just last week I regained normal feeling in my toes. Yes. For two months I've been yelping in pain every time someone brushed one of my feet or even looked at them.

Never play Trampoline Dodge ball in bare feet. I wish I had taken photos. This is what my foot felt like two months ago. (Ignore the broken toe. That's totally not my X-ray)

Yes. I wore the skin off my feet and grew it back. Why didn't anyone tell me that going barefoot on a trampoline where ninety million other people rubbed their foot germs was a BAD IDEA?

I'm too old for this crap.

(And I'd do it again in a heartbeat)

At least it was your skin that grew back.

And not something green.

G&P Blogz-
If it DID grow back gree, least my saying "Hulk Mad" every time someone pisses me off would have some authenticity...