Yesterday we left off with a few photos from the trip. (Golly, I hope I'm not boring y'all with my trip details. I mean, it's not like I dragged you here against your will, chained you to a dentist chair with laughing gas tubing and threatened to present a slide show of my son's first year, starting with photo 1 of 876. May I mention, my traffic feed is at an all-time high? Thanks Dudes and Dudettes!)

I'm really not sure what this thing is, but some maid out there has an undiscovered talent of folding towels. 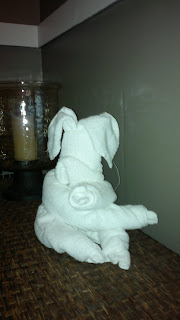 Elephant? Rabbit? We all worried that it would come alive in the night and eat half of our faces.


Gary was pretty upset that White Horse opened at 4pm. Apparently they have booze and books; two of his favorite things to be simultaneously enjoyed. Two things that he would not experience this day. 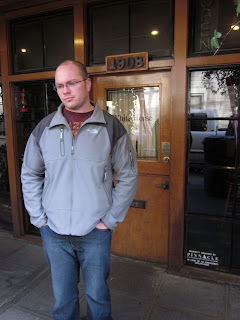 From left to right: Gary, Elle and myself at Kell's. We're in disguise. The internet can be a frightening place. 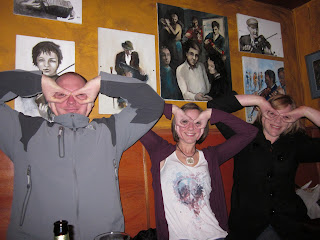 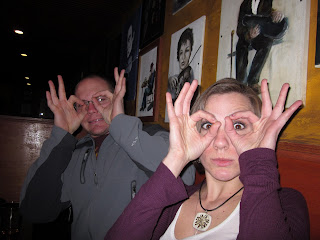 Elle and myself. C'mon, agree with me. I had every right to punch that Drunkard in the face and steal his wallet, right? It's not unfathomable that we could be sisters. 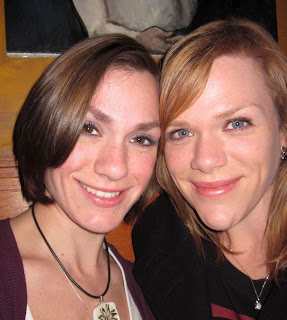 Gary, attempting to lift off with his rocket pack (Cause we're super heroes. Not cause beer makes him gassy) 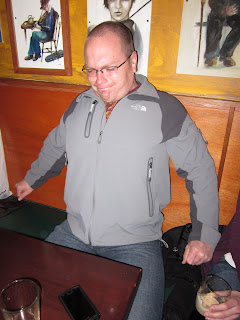 A kid's clothing store with a Creepy Motherfreaking Doll Creature out front. Standing in a stroller. The next day we went by it again and someone had changed it's clothes. That, or it went out and stole some. 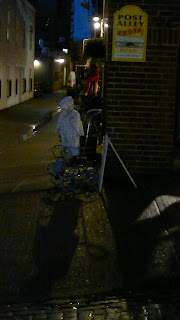 Breakfast payment at Bacco's. I think the waitress charged us a fee for laughing. 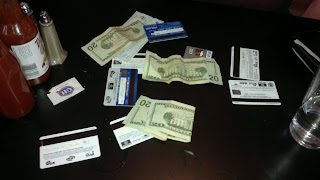 Leaving Pike's Place, we went in search of Troll Bridge. Elle forgot her Troll Spray and it tried to eat her. That's what you get for trying to pick his nose! 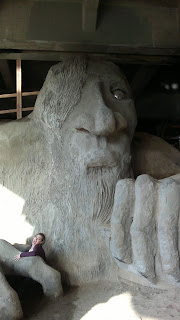 After we left the Troll Bridge, we tried to hit a few other places but apparently everything is closed on Monday in Seattle. Gary tried to kill us all with bad directions and I did my best to fulfill his attempt but we managed to come out alive.

I'm kind of enjoying this whole post-a-picture thing, so come back tomorrow for a collage of Things We Like to Do.

I'm not sure it is. I think they paid an orphan to stand out there all night.