Okay, guys. I know that I'd left you scared by my outburst begging for traffic and bemoaning the snowstorm. But really, it was pretty awesome waking up at 6:20am (fifteen minutes LATE) to hear my friend honking outside while her kid stood on my front porch freezing her bubinski off. I flew down the stairs at breakneck speed hurdling Legos, Barbies and the vacuum (yes. I keep my vacuum on the stairs. Where ELSE would it go?!). When I threw open the door and tried to look like I'd been vacuuming the floor and talking on the phone the whole time and hadn't heard the doorbell over the noise, I noticed the flurries of snow. It was pretty awesome. I had little time for awe as my friend sped off for work, probably shaking her head in wonderment at my mutlitasking skillz, y'all, that early in the pitch-back-earlier-than-the-cows-are-alive morning and vowing to be more like me. Personally, I vowed to set my alarm clock next time and to not sleep with my bedroom door shut, thus blocking the sound of the doorbell.

I had to plan my day out pretty strictly. I mean, it was a virtual tidal wave of snow flying through the air out there. If I didn't stay on top of it my entire family could get snowed in. Then, I would have to learn how to home school all five kids. I don't have any formal training and while I am pretty good in a crisis involving math, I had no idea what I would resort to at lunch time. I'm not even sure there were any tater-tots in the house. And Jell-o? WHERE does one keep the boiling water?! You can see where this was headed.

While I steered the kid to the babysitter television, I started to mentally tally the needed supplies in my head.

By the look of things, I guessed the kids would need a few hours to shovel us out (I'm kidding. I would never send them out there all alone. They might make a break for it and I would need to be ready to chase them down). I rallied my two eldest kids and the neighbor kid, got them all fired up and sent them us out. You'd be surprised at how well kids can work together when the thought of breakfast is motivating them.

I didn't have any of the needed supplies, so we pretty much just gave up immediately and hoped that we'd be able to make it out of the driveway.  I grew up spinning donuts in the snow and driving like an idiot through the woods in my dad's Subaru Justy (or The Crusty, as my brother called it - hi, Mom!!) and never once had an accident. I was pretty sure my SUV would kill us all before we got out of the driveway.

Luckily, the kids made it to school on time, I had my coffee and the world stayed on it's axis.

I almost lost the middle child in the drifts. It was pretty close. 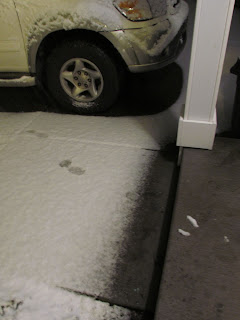 Ummmm never got in an accident??? Well I guess you can say that because another car wasn't involved BUT bad driving on snowy was the issue. LOL

Please blame my intense headache on the grammatical errors in my post.

I was never TECHNICALLY in an accident. Crashing my Volvo into a snowdrift doesn't count. I was in a hurry.