How I spent my Saturday

Alright, enough of the easy-peasy photo-only posting, y'all.

(Elle also kind of busted my butt for the photo post, asking Why are all of those terrible photos of me?)


Uh, why did the chicken cross the road? Because it could.


Today we took two 3's, two 5's and a 9 to the mall. Yeah, I KNOW. Apparently, Elle and I are gluttons for punishment. Pile us up a huge plate of horror, Hal! (J/K, I don't even know anybody named Hal)

There's a movie screen set up down at one end of the mall that plays continuous movies all day long and instead of hauling five kids and ourselves to the theater across town that charges eight bucks a piece, we elected to bring Mohammad to the mountain (or the mountain to Mohammad or whatever).

The current movie is Mr. Poppers Penguins with Jim Carey. Have you people seen this movie? I wish I could say yes. Alas, I could neither hear it nor see it. Here's a bit of what was going on: 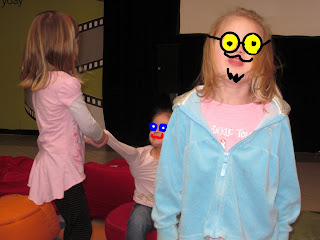 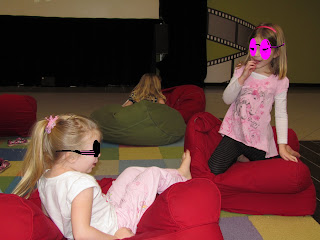 And a whole lot more, but it was near impossible to black out everyone's faces.

Uh huh. The volume for the film was turned down so low that nobody in the area could hear anything (although, even if it was blaring, I doubt anyone could hear it over our ill-behaved children) and there was so much light that the film wasn't really showing up on the screen. After forty-five minutes we finally gave up trying to get the kids interested and left the area in favor of the play space halfway down the mall. A bold move, since there were about eight hundred kids in a 20x30 foot area. 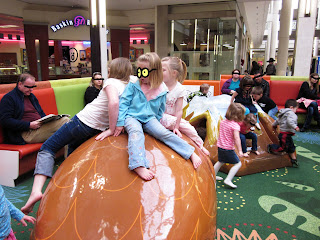 Bonus if you can find the smiley face hidden in this photo.

After the insanity, we took the kids home where they proceeded to throw multiple tantrums and basically melt down from a toddler inferno. It was so much fun that I'm thinking of hiring them out for parties.

Not a lot of funny stuff has happened because I've pretty much been housebound the last week. After last weekend in Seattle, I've been trying to get the house back in order, whip the children... into shape and basically try to recoup my life. You wouldn't think that a quick weekend getaway would wreck so much havoc, but it clearly does.

In other news, on Monday Elle and I plan to try our hand(s) at trampoline dodge-ball again, so that should be fun. I plan on wearing shoes, stretchy pants and bringing it. You know, my butt-kicking skillz. Also, better footage of The Great and Powerful Blogz getting slammed in the face. Apparently it's his thing.

AH HA! Blogz was ballz-free. Unlike yourself, mein seester.

Also, now the world knows that you two hang out and play with each others bal- wait. That sounds bad.

You are such a dork. Hiding a smiley face in the background.