Migration of a Nation 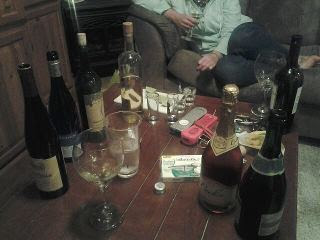 Between the four of us girls we managed to knock back four bottles of wine, two bottles of champagne and half a bottle of tequila. We were obviously in fine form.

I've never mentioned mine and Elle's love for tacky flamingo's, but just know that we love those ugly little one-legged hawks.

Our neighbor that lives on the corner recently acquired a girl friend. And with her came a flock of plastic pink flamingo's. I guess. I dunno; they just showed up one night. There's about ten or twelve of them just littering his yard.

Whomever did this? My new hero.

Anyway, last night someone suggested stealing the birds. I think it was Rawr.


Me: Uh, HELLO. Bad idea? I'm not going to jail for that. I have no make-up on and my mug shot would look like crap.

Me: Shut up, Elle. We're not stealing them.

Shenanigan: [blank stare, probably wondering what in the crap she's gotten herself into]

Me: Let's go move them around his yard instead.


Elle always yells when she drinks.


So that is how, at midnight, the four of us ended up donning black hoodies and running down the street and into our neighbor's yard to rearrange his flock of plastic birds. 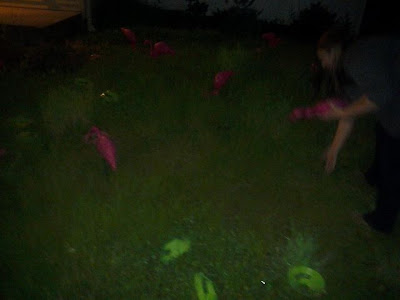 A very blurry shot of Shenanigan assisting in the migration 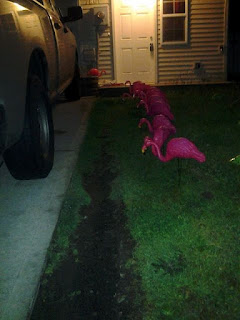 Elle's formation. I have no idea what they are doing. Personally, I felt that we should have arranged them in a big cluster, staring at his door.

Rawr had mysteriously disappeared, only to reappear AFTER everything was said and done to inform us that her husband had watched the neighbor pull up in his truck mere minutes before we descended upon his yard.

Which means he was probably watching us from the window.

Which means when we go back tonight to arrange them again, he may be waiting for us.
Posted by Unknown at 12:34 PM

You should buy them all those eyeglasses with the fake noses and mustaches.

Dude! You guys should arrange them like the statue of the Marines raising the flag at Iwo Jima for Memorial Day!

Dude, I am totally doing that. Only... they don't have arms.