Rawr turned 30 this week. Last night we hosted a BBQ Birthday with The League Inc. (which is fancy for us girls, their husbands and kids plus a bunch of neighborhood stragglers).

As I have been requested to not "put this shit on the internet," I will keep most of the wordy details to myself, instead sharing just the highlights. 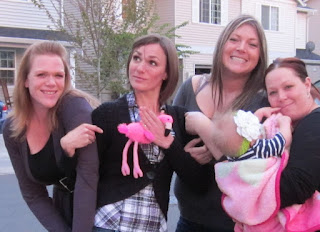 Me (sans eyebrows & before The Burns), Elle, Shenanigan and Birthday Rawr (complete with baby)