My Day in Court

How was my day in court, you wonder?

What do you think. 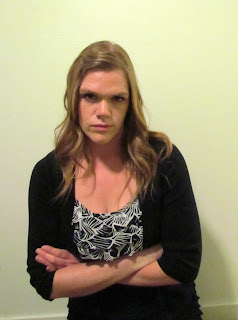 Not exactly the happy face of Justice now, is it?

I am a good citizen. I pay taxes. I help unfortunate people and I try to be nice to people when I would rather punch them in the throat. I follow the rules. Well... there was that one time I sneaked into a Dave Matthews concert through the wheelchair access door while wearing a medical alert bracelet that I technically did not deserve, but that doesn't really tie in to this story.

Don't get me wrong; I'm all for running around like an idiot and having a fine old time, but I do it within the confines of the law. Partially because I was raised in a black and white world where wrong was wrong and right was usually wrong as well. But mostly, because I have this conscience that will nag me to death if I ever try to do anything shady. And I'm also scared to death of policemen. They're intimidating. And usually hot (I've only been pulled over like, five times and all of those times were by guys fresh from the academy and plus I was like, 19 years old then so it's not gross).

I may or may not have done something that required my presence in a court of law today.

I decided to at least look like a contributing member of society when attempting to defend myself, so I threw on some kind of frilly thing with a pair of boots because I couldn't find my hooker heels and I set off in the disgusting rain to have my day in court.

I arrived thirty minutes early, because I am almost never prompt, and entered the courthouse. Where I came face to face with three elderly security guards and what I think was a hobbit, but I couldn't really tell because more importantly, just beyond those guards was my nemesis. The Metal Detector.

Maybe this is a good time to mention that I have sort of a problem with metal detectors.

Like... every time I go through one I end up getting a whole body scan/pat down/HIVES because I always set the damn thing off.

One time, Elle and Gary and I flew to Europe and I kid you not, every SINGLE TIME we went through security we were held up. I'm not sure if I ate a lot of metal as a kid, or what was going on. I just know that it's not cool to have your body groped by strangers.

Of course, I set off this freaking detector so I basically had to remove everything except my shirt and my skirt while freezing to death in the drafty doorway as the 900 year old attendant scanned me from head to toe. Mind you, I'm 5'10 and this guy was about 5'1. I had to do that awkward hunch thing so he could scan my neck. Which I thought was unnecessary. It's not like I half-swallowed a knife and was just waiting till I got around the corner before I yakked it up and shanked someone

I grabbed my coat and keys and purse and shoes and booked it to the second floor, which was deserted. Sweet. Never been in a courthouse before, except actually that exact courthouse once before so I guess I just lied, and there was no one to help and I really just knew I was going to go to jail. Because I was lost.

Oh, heeeeyyy, what's THAT? I said to myself. A giant screen with felons listed. Oh. Wait. There was my name. Room 2. Alright. Where is that? WHY ARE THERE SO MANY COURTROOMS? What kind of a town is this that there are so many criminals out there?!

I found the right door and peeked into the room just as the judge made an angry face, papers flew and the guy standing in front of her jumped back a foot and tripped over a chair.

Oh, dear God. I am going to die today.

I slipped through the doors where a GIANT SIGN instructed me to take a number. You walk into court and take a number? What is this, a fabric store?

Perhaps I jinxed myself by wearing black and white because as soon as the judge saw me walk into the courtroom, I wear I saw her mouth JAILBIRD and raise an eyebrow.

It got even better when three people in front of me had the exact same issue I did and the judge basically told them to eff off and sent them on their way to Guantanamo Bay or something.

I stepped up to the podium and listened while the judge read off my offense in a big giant number code.

I was so totally set to pour my heart and soul into my defense and just got started about how I was at LEAST five feet away when the incident occurred...

Until the photographic evidence came out.

Oh, shit. Um. Funny, that's not how I REMEMBER it.

Well, did I not say to Rawr immediately after the incident, "I'M IN A PHOTO CLASS. HOW DO I NOT HAVE MY CANON WITH ME TO PROVE MY INNOCENCE?! WHERE IS A CAMERA WHEN YOU NEED ONE?!"

Judge: No. The photos look great. It's you who seems to be in a pickle.

Me: [eyeing the photos] Um. Maybe not exactly five feet.

Judge: You could not be any more on top of that if you crawled up into it.

Judge: Nope. I'll cut your fine in half. Because really, this is just embarrassing for you. In the future, Ms. Oneto, keep five feet from any driveway.

Yes, this was for a parking ticket. It's not like I was brandishing a weapon.

Our justice system is broken.
Posted by Unknown at 9:30 AM