I kind of feel like I've been a pretty crappy writer lately (what, you noticed, too? Okay, but you don't need to agree with me that quickly. At least give me a false sense of security by shrugging your shoulders and looking away instead of staring at me and nodding your heads).

So. What have I been up to?

You have those, too? Crap. I thought I was completely unique in this. I imagined I arrived with the best excuse defense against posting lame stuff and whining about the daily activities of my out-of-control kids.

Fine. I don't know what we're going to talk about then because that was really all I had prepared.

I guess I could tell you about this: 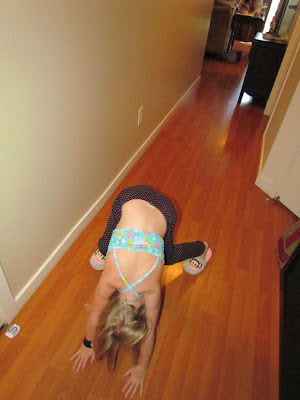 I'm not really sure what it is. I was hoping one of you could tell me.

Or maybe the a-hole feline that keeps eating all of my stuff. Like, right this second he is chewing on my sock while it is ON MY FOOT. He also eats broccoli. I had a picture, but someone in my incredibly disorganized photo file I lost it. Temporarily. Like my mind.
Really, I've been a tad absent because, while there seems to be an abundance of crap happening in my life, none of it would be entertaining for you, Peeps.

I haven't been out in ages, so there aren't any tales of punching a drunk guy or accidentally stealing stuff from Ikea.

However. Rawr and I have planned a camping trip in our very-near future with our families. That should be fun, right? I haven't been camping with my kids. Ever. Last time I went, it was with Elle and another friend when I was 17, they were 15. We forgot something at home, so Rica (nope, never mentioned her here. YET) and I left Elle in the tent... alone with the two dogs in the middle of the woods (relax, it was a designated camp ground. Other people were there)... and drove 40 minutes back to our house. Come to think of it, I think what we'd forgotten was dog food. Anyway, when we finally got back to the campsite Elle was holed up in the tent with the dogs. As we walked up, Elle crawled out of the tent (a little like that chick from The Ring) and let loose a stream of profanity while giving me the Death Stare and refusing to talk to me for the rest of the night. Looking at it now, that was sort of hilarious. In that whole HELLO-your-sister-could-have-been-killed-or-even-worse sort of way.

As I wrote this, Elle passed by the doorway so I called out to her and, "Hey, remember that time we went camping in Potato Patch and-"

Wherein she cut me off and said, "YEAH, I DO," and proceeded to flip me the bird and let loose pretty much the same stream of profanity as the night in question.

But Elle isn't going with us this time and neither Rawr nor I own a dog, so we should be good to go.