My house has kind of been insane today.

I did a pretty good job of ignoring it during my shift so that when Elle arrived home from work and it was my turn to run out and take care of some appointments, the girls were good and riled up. Add in Shenanigan's 8 and another friends 2 and the house had sort of a MURDERDEATHKILL theme going on. My 10 and I waved good-bye from the car while Elle stood on the porch with a swirling mass of six kids ranging from ages 9 to 2.

I love doing that to her.

Mainly because I do this for a living while she works out of the home. I realize that this makes us sound like Sister Wives. Say what you want: It works for us. Plus, I get punchy when people try to make fun of us. It's the redhead in me looking for a fight.

This evening, after dinner and general dispensing of kids to their parents, Elle and I took the herd upstairs to bathe them in a rotating fashion. Thank goodness for older kids who can bathe themselves, which means less work for me.

One kid looked like she had a terrible case of Necrotizing Faciitus on her diaper area and proceeded to rub her booty all over everything on the second floor while the two 5s ran (butt-nekkid) screaming with laughter from room to room, towels flying behind them like capes.

You can't really blame me for sidling out and hiding in my bedroom while Elle handled that crap. My kids are older and therefore more self-sufficient. Which makes me unable to cope with tiny Shriekers after more than eight hours.

I tuned out the noise (I am SUPER good at that, by the way) and entertained myself by posting links to Nickelback on Gary's Facebook page and using search engines to look up stuff like "How can I get Chad Kroeger to host an all-night concert in my brother's backyard?"

Eventually I realized the noise had dwindled. And then I became curious.

I peered out the door of my bedroom. Nothing.

That's when I heard it. A faint, weak voice.

Where is the vacuum?

Cleaning Zombies? Maybe they worked at the Holiday Inn before they got their faces chewed on. That would make sense, because recently I heard that a guy ingested some kind of bath salt, freaked out and ate another guy's face off.

That didn't actually make sense, though, because most of the mess was downstairs in the living room.

Elle? I leaned as far off the end of the bed as I could without actually getting up.

Me: Dude. Where are you?

And this is what I saw. 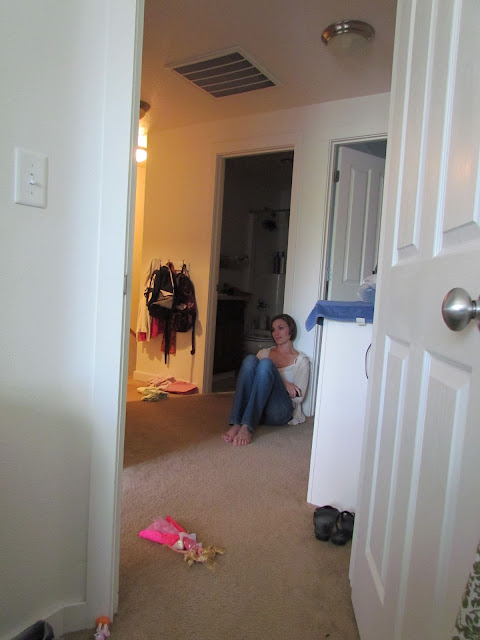 And all I could think was that now I would have to deal with the screaming.

I'm glad school is out this week. I think we all need a vacation from the crazy.
Posted by Unknown at 9:22 AM