Extra Extra, it's in front of your face

Telephone conversation between Mumsie and I.

Mumsie: I think someone stole the tractor.

Me: That's something I never thought I would hear.

Mumsie: Yeah. Dad saw some guys wandering up and down the road over the last few days. He thinks maybe they were scoping out houses.

(My parents live out in the middle of nowhere in a teenie tiny town with like, population eleven. Anyone unrecognizable wandering up their road should raise immediate suspicion. The house should have been put on lock-down, the hounds released and the bunker retreated to)

Me: That's a little creepy. I guess it's a good thing Dad owns 750 guns and three attack cats. And some elk.

Since I'm pretty eloquent wordy, I thought I might make a poster for my parents, just in case the tractor was spotted cruising down the main drag.


MISSING
John Deere Tractor, green
Last seen on 10 acre plot in the middle of nowhere
Useful for mowing grass and other activities
Please raise your hand if you see it 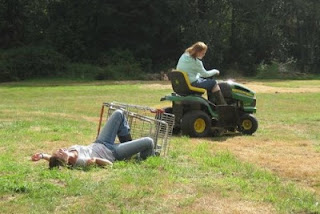 My parents filed a police report for the missing tractor, but Mumsie couldn't shake the feeling that it was just too weird for someone to steal their tractor. She called me back a few days later.

Mumsie: Where we usually park it. Except it was under a tarp.

Apparently my 9 was the last kid on it and covered it with the tarp so it didn't get wet in the rain.

I amended my poster.


MISSING
My parents sanity and eyeballs
Good luck finding those
Posted by Unknown at 10:10 PM

Holy crap! I'm glad I'm moving out of the area before the spoon feeding and chin wiping begins...