Rawr asked me to do her a favor.

And I tried to avoid it, I really did.

Because I care. I like to think I am a nice friend, someone she can depend on for fun. I like hanging out and laughing with her. Not at her.

Shenanigans gets it. Shenanigan has her own friend, a professional, who does hair. Shenanigan is smart, and asked this professional hair friend to transform Shenanigan's beautiful brunette locks into a lighter version of beauty.

I was no where near those girls when that happened.

Because once, in high school, I was recruited by a friend of mine to help "frost" one of our other friend's hair (I won't even explain what "frost" means, other than MISTAKE). That was the 90s, peeps. You all MUST KNOW what that looked like. Brunette strands, weird white streaks, and a grown-out perm. With a hair scrunchie.

So you must appreciate how stealthily I avoided Rawr, until one day when she cornered me in my living room and all but threatened to highlight MY hair if I didn't help her.

Fine. I went. Rawr got her cap. Or her Hair Plug Cap, as I came to call it. 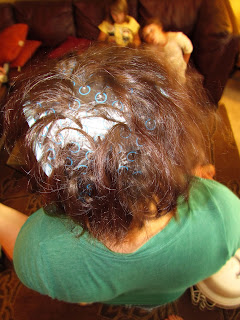 It looks like she went to Mike's Discount Plugs with a BOGO coupon.

I DID THIS TO HER. 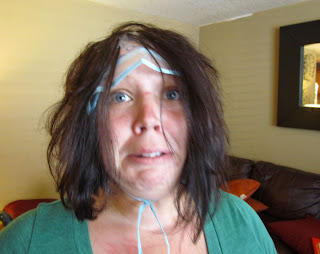 Sometimes, letting me into her house, armed with a camera and ill-intentions, isn't the smartest thing for Rawr. 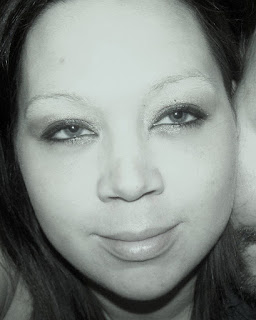 But, Rawr had roped me into the whole mess, and I'm not one to quit, so I just closed my eyes and did the best I could.

(Do you guys know how this stuff works? You go to a friend's house, down a shot of whiskey which is SO GROSS, and then your friend hands you a crochet hook and tells you to rip her hair out. It's weird. But I did it. Because I thought I was a good friend.)

And then, Rawr whiped out this dehydrator thing and told me that she had to shove her head under it in order to activate the color changer.

I felt like we'd just entered an old episode of Rainbow Brite.

Which was cool, because we were already traveling to 1992's hair style, why not go back another decade to the 80s? 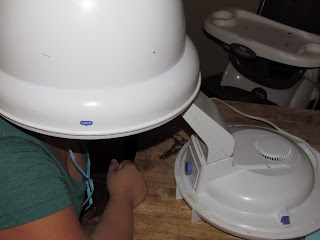 Rawr poked her head out a few times and each time I refused to look because I was really afraid her hair would fall out and then she would try to scalp me and I'm not a fast runner and I just know I would end up looking like a Kewpie Doll after she got done with me. 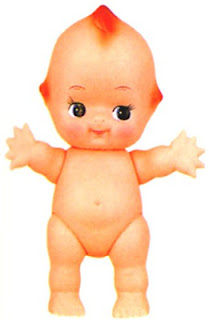 Which is extra bad because Rawr collects those things, and also because I don't like the idea of not having any clothing.

After what seemed like hours I made Rawr take her head out from under the heat blaster, at which point I silently screamed because her hair looked white. As in, Old Lady White.

I pointed to the bathroom and Rawr went to wash out her hair.

And. Um. Came back looking like some asshole had attacked her head with a copper weave. A crooked, ill-placed copper weave. With a hint of grown-out perm.

OMFG, I thought. She will kill me. 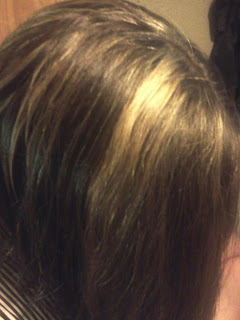 This is later. After she dried it and combed it and I don't know, got a wig? Because THAT is totally NOT what it looked like when I first saw it.

Rawr: I think... OH MAN. I might have to bleach my entire head.

Me: [reflexive flinching and ducking] I didn't want to do it!

I guess it turned out all right in the end.

I mean, Rawr is still speaking to me. And she didn't have to shave her head.

Unless. No one plans revenge out loud.