The other day I was reminded of a slightly evil stunt I pulled a few years back.

The good thing about my poor memory is that I tend to block out those moments where I've committed an act that I most likely knew better than to do, but did it anyway because of two reasons: the defiant ginger attitude from my teen years is still alive and lurking within, or I felt like screwing with something or someone who once pissed me off and the opportunity for my Empire Striking Back just presented itself in a pretty little package complete with a bow.

I was raised in the Mormon "religion." For those of you unfamiliar with that group, you can find a brief rundown HERE.


Update: I forgot I could embed the video. Yay for 2am clarity!

We aren't going to get into a God discussion here. I left that church when I was 16 and realized I had my own brain and decided to exercise my right to use it (something that was frowned upon by the elders of the Mormon church. They do NOT like it when you ask questions).

I have some unresolved issues with my experiences there, but I don't dwell on them.

I do, however, recognize the ring tone of opportunity and you bet your ass I'm going to answer it in some pretty passive-aggressive ways.

About 12 years ago, when my oldest child was just an infant, we lived in a one bedroom apartment about an hour from my hometown.

For those of you ladies with children, I don't need to explain to you what it's like to have a new baby. You are never, ever fully prepared. Even if your spouse is super helpful during those nighttime feedings, it's still your breast the kid wants which means you are up for a half an hour every few hours and if you were anything like me, you were retarded and didn't sleep when baby slept.

You stood there hovering over the crib to make sure baby was breathing, and then you stared in awe at this beautiful little creature that you made from scratch with your own organic ingredients and you wondered about this baby's future and then before you know it you haven't sleep longer than an hour at a time for the last 3 months and you can't remember your name and you might even walk into the wrong apartment one day and scare the crap out of Mrs. Choa and now you hide every time you see her in the laundry room.

So it was during this time of parental bliss that the phone rang one sunny fall day.

Me: Hell- [drops baby laundry all over the place] Hi? Hello?

Caller: [with familiarity akin to, well, next of kin] Hi. Emily? How are you!

Me: [pulling the phone away from my ear as though I could look through the phone] Uh... who is calling?

Mind you, this was 2001. We barely had cell phones back then and none of them had caller ID.

Caller: It's me, Sister Bliss calling

If you watched the video, you'd know that it was a Mormon on the phone. They call each other Sister and Brother in place of Missus and Mister. It all sounds very incestuous, which freaks me the hell out.

What. I was polite. You have to be very direct with these people or they'll send their young adventurous missionaries after you. 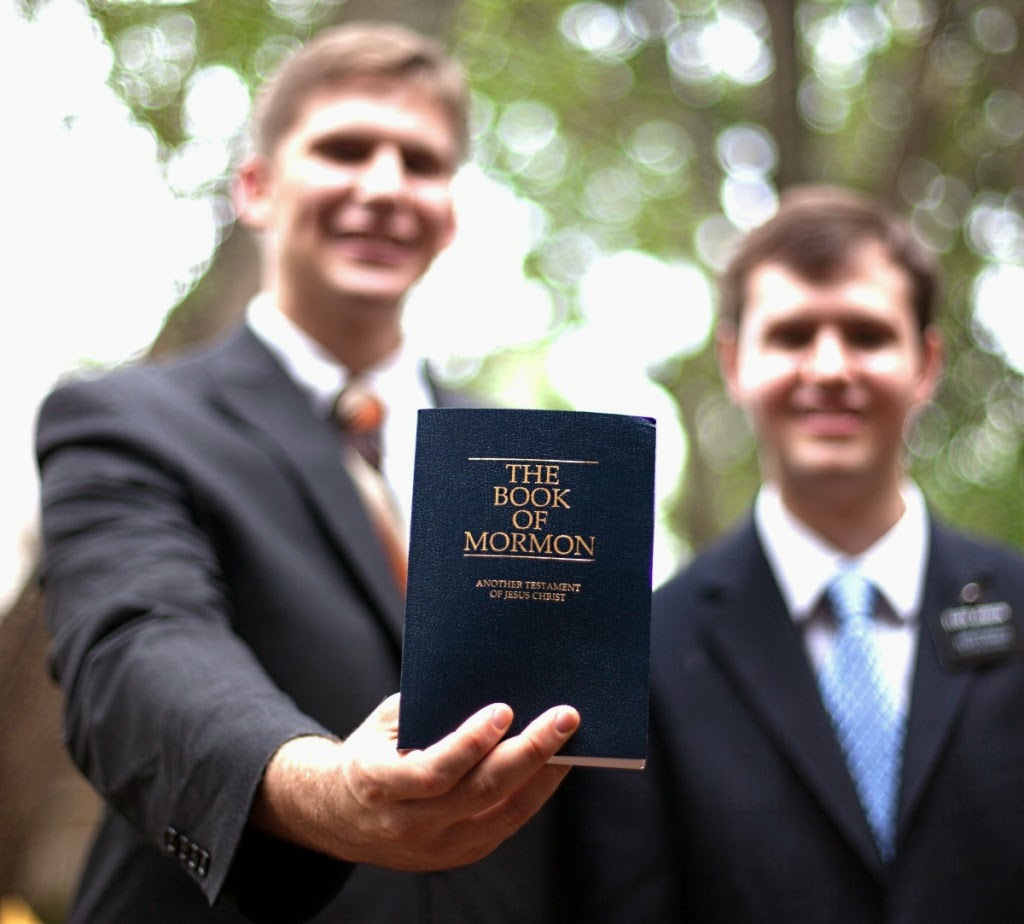 Ding Dong! We've got something for you!

You can't lead them on, or else they'll show up, only with reinforcements. Biker Gang Style. 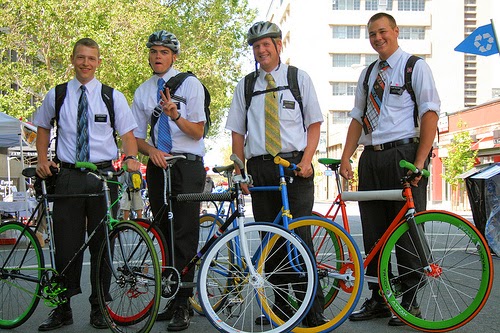 You didn't answer your door the past 17 times we came by.
We got worried and brought our friends. Hey, is that dinner?
Back to the call.

Sister Caller: I'm just calling to update our records. Do you have a minute?

Sister Caller: Are you married?

And then I just let my mouth take over.

I told the story of my fake wedding in the state of Florida and how Uncle Bobby's dog ate the cake and peed on the priest. Then I told her my husband wasn't really around because I had a bit of a drinking problem, but if he hadn't gone to jail in the first place I probably wouldn't have had to turn to the bottle for comfort.

I think at this point I was standing outside of my body, watching this train wreck approach the bridge and not even wanting to pull the warning whistle. I just let it go. She didn't even say anything, which was nice because I hate to be interrupted.

Eventually I grew bored and just hung up on the woman, going back to sorting laundry and changing diapers and the like.

A few days later, we received an invitation to attend a progressive dinner with some friends we were just getting to know.

I remember wrinkling my nose at the mention of "Progressive Dinner" because when I was a kid, the youth group from our church forced us to participate in one of those dinners. For those of you who do not know what a Progressive Dinner is, each course of a meal is held at a different house. You waste time and gas driving around getting lost and missing dinner. I hadn't wanted to attend the dinner as a kid, but was told by my parents that I didn't have a choice. So, I volunteered to host the salad portion at my house and then purposefully did nothing to prepare. When everyone showed up I just stood there and told them I'd forgotten. My parents grounded me, just like I knew they would, and I got out of the rest of the dinner.

I begrudgingly accepted the current offer, telling my then-spouse, This better not turn out to be some kind of Mormon trap.

You know where this is going, don't you.

Normal people don't name dinners. They just invite you over, open some wine, feed you and offer fun conversation.

If you're really lucky, no one gets drunk and steals a bunch of plastic lawn flamingos or tries to blow you up with mortars.

We arrived at the first home with our new friends. We were welcomed into the entry by a friendly grandfather-type and pleasantries were exchanged.

I should have known what was in store for us when I spotted this hanging in the foyer: 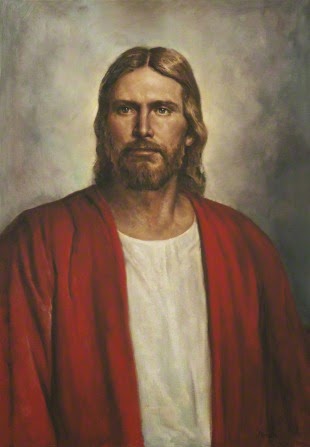 It's the token Jesus photo. Every Mormon has one.

I didn't dwell on the photo because we were being introduced to the hostess. I usually develop Introductory Amnesia during these exchanges. I hear your name, I just don't retain it. You could say, "I'm Jane. Tell me what I just said," and I would blink and wonder why you stood there refusing to introduce yourself.

We chatted a bit about kids and niceties and the like. I told her about our new baby and she showed me some photos of her children and grand children. She asked if we planned to have more and I remember laughing and telling her that we were still getting used to the first one.

I think it was after I'd given the lady my life history that she turned to me and admitted she hadn't caught my name. I apologized and told her I hadn't remembered hers either. Then I introduced my spouse and myself.

Now, I'm not famous. My name is actually THE most common female name is all of the world, so the reaction of this woman upon hearing my name struck me as a bit odd.

Her eyes about blew up out of her head and she took a step back, knocking over a lamp and excusing herself rather quickly.

Our friends looked at me, then at the door our hostess had retreated through.

"That was Evelyn Bliss," the wife said. "That was also weird."

Bliss? Where did I know that name...

Flashbacks of the phone call flooded my brain.

OH MY GOD. The woman I had just spilled all the details of my life to was the Mormon I had just lied to and hung up on so rudely a few days before.

You'd think that we would have hightailed it out of there, but instead I acted like a little bitch and stayed for the next hour engaging in conversation with the other Mormons and lying to each and every one of them. I told a different story to each group of people we spoke with.

An eye for an eye. If you've ever been Mormon, you know what that means.

So yeah. We never saw that couple again after that disastrous night. Which was good because I clearly needed Jesus and you have to go to a real church for that.
Posted by Unknown at 9:53 PM