So I'm a girl, right? Some people have the mentality that girls are supposed to be cute and girlie and get their nails did and fuss about their hair and spend all their money on shoes and handbags and talk about childbirth and stretch marks and so on.

And while I've actually done most of all of those things at one point or another, I'm not really like that. I'm not manly, per se, just regular.

Back when we were all turning 16 and getting our driver's licenses, my dad made sure us kids knew how to change our own oil and fix a spare before he would let us drive. Although I know how to do it, I prefer to keep the nice folks down at Jiffy Lube employed while I sit in their office, drink gas station coffee and watch Cops. 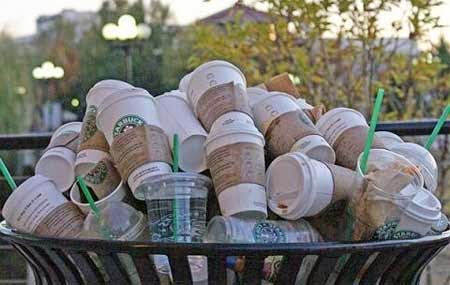 It kind of takes a while

My sister, Elle, likes to assert her independence and spew her I don't need no man persona all over the place and change her own oil and pump up her arms like Rosie the Riveter in order to prove her independence. 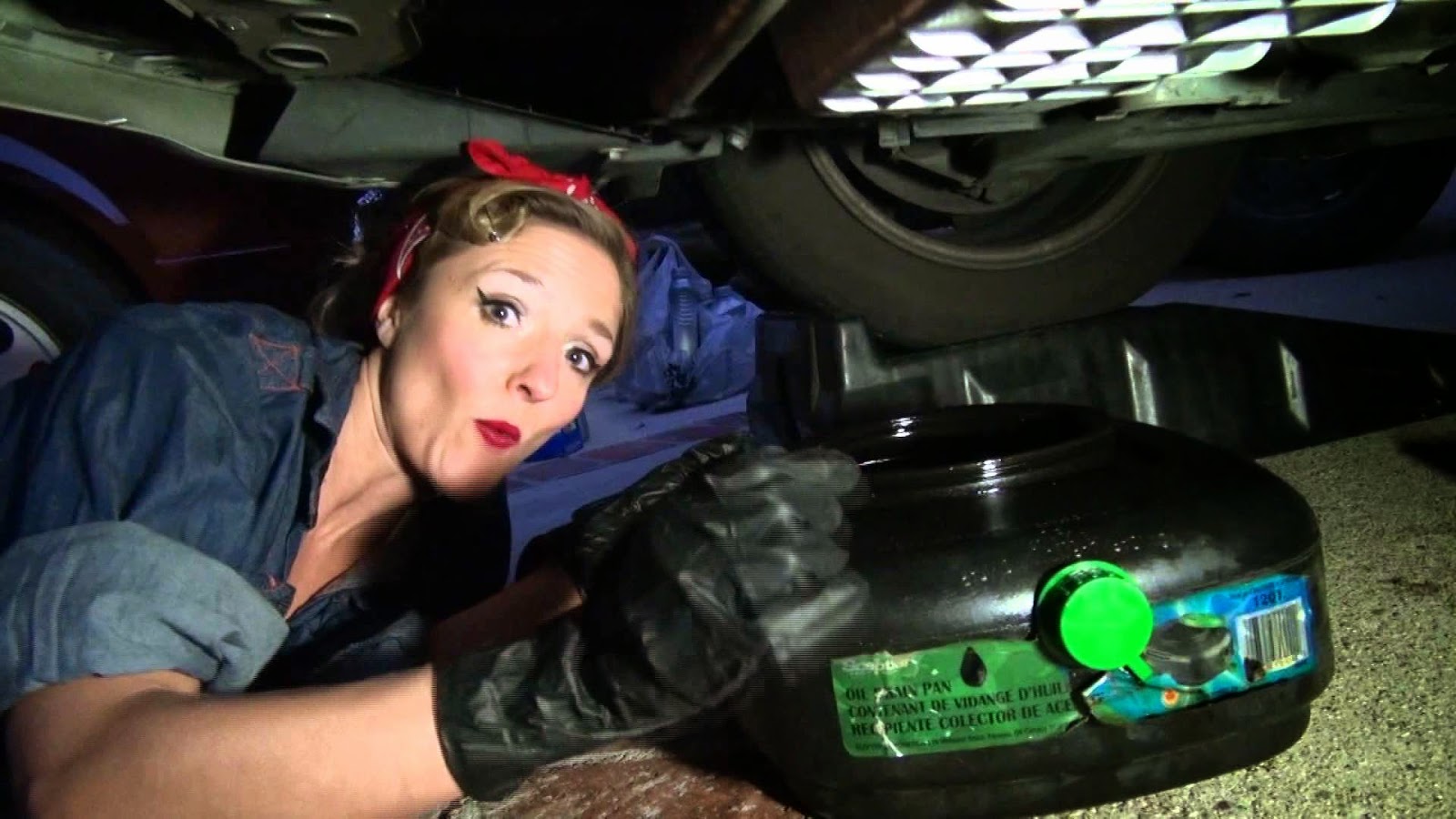 This isn't actually Elle, but maybe
they could get together and work for a
woman's right to change their own oil

So technically, while some might find that can-do attitude admirable, I prefer to call my dad when I break something mechanical. Because last time I tried to take my lawn mower in for repair, I forgot to wipe the sucker tattoo off my face and almost got incredibly ripped off.

Still dealing with the same lawnmower problem a year later (because that's how I roll), I called my dad again.

The grass in our front yard was beginning to be mistaken for a free-range pasture and I decided something needed to be done about it when I found a dead horse yesterday morning. 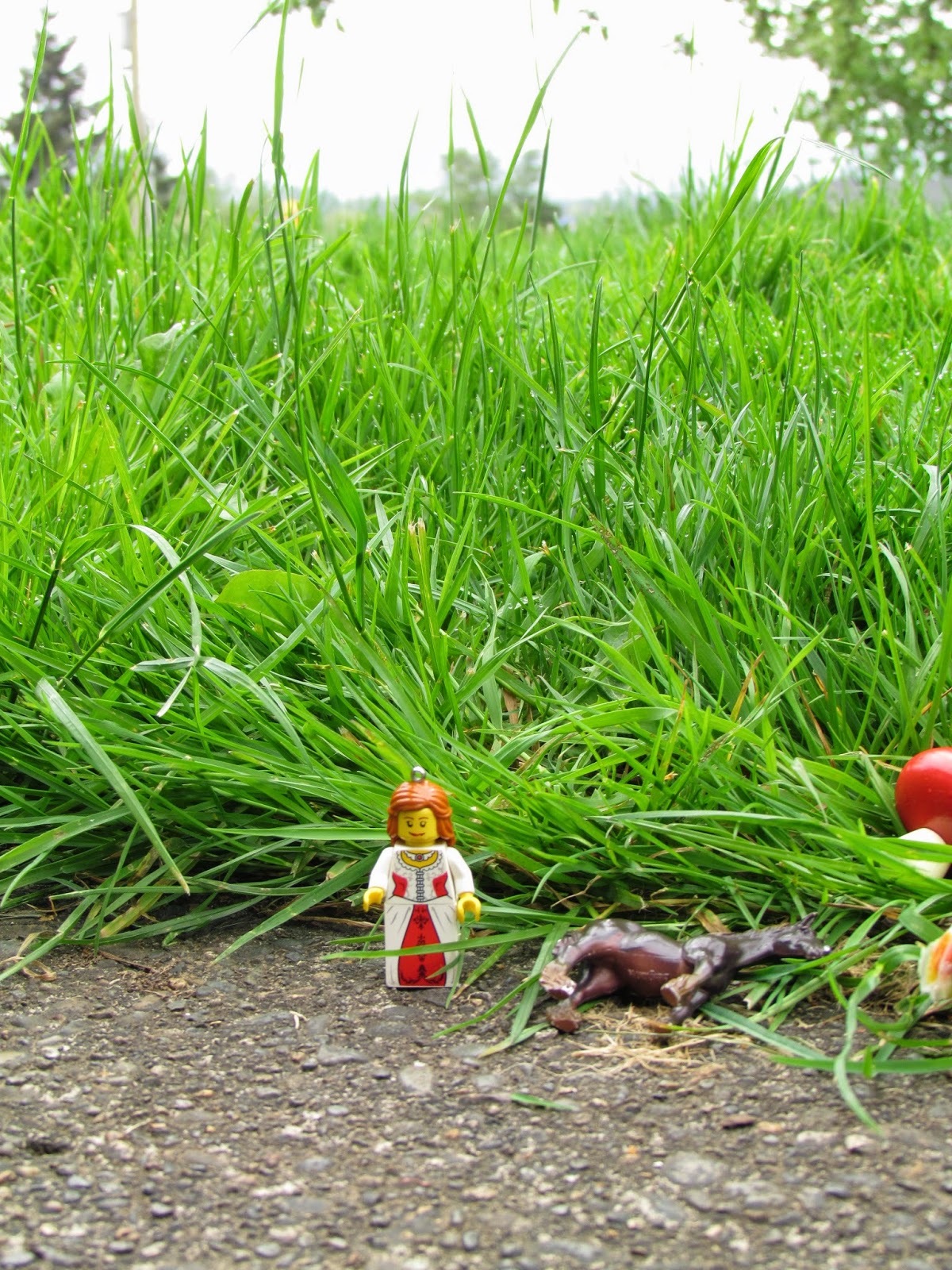 I never said it was an actual horse.

I'd been borrowing my neighbor's mower but her son-in-law blew it up last week and now none of us can mow our grass.

After getting the rundown on what I needed from dear-old-dad, I ran to the parts store for a can of starter fluid.

Now, if you're female, you know that usually women know about as much about a parts store as a guy does about grabbing a box of tampons. 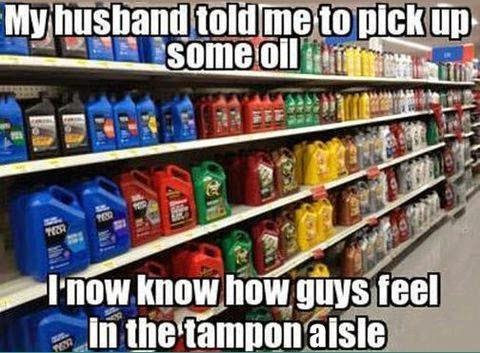 So many choices. Most of them should work, but you don't know exactly what you're looking for.

I hate walking into auto stores.

The guys look up, fix their eyes on you and have that slow smile spread across their face that says, You have no business in here. I pity you, and I shall save you.

To which I defensively pull back my shoulders, tip my chin up, nod, and walk with a purpose to the nearest aisle while furiously stealing glances left and right, trying to get my bearings before someone catches on that I have no idea what I'm doing.

While I don't want to change my own oil, I do want to select my own parts. By myself. I hate sales people. I avoid them like the plague. I don't care that they were hired to help people. I'm a ginger. We're stubborn and we like doing things the hard way.

Especially when I'm feeling all insecure about my gender and taking that once-a-year stance that women don't need to be told what to do by a man.

I realized I was being tailed by some 18 year old kid with a smile that said, I'm on to you, chick. You couldn't look more out of place if you were wearing a Lion Suit.

And I've worn a lion suit before, so I know what feels like.

I turned to the left and grabbed the nearest thing. He passed by, but not without giving me that look of Right. Because you totally need a lawnmower tune-up kit.

Wait, what? I totally DO need that. But I wouldn't know what to do with it even if that kid came over to my house and installed it himself.

I put it back.

A man covered in grease can down the aisle. I moved aside to let him pass. He stopped and stared at the shelves.

I stared at the shelves.

He looked at me.

I looked at him, wondering if I should ask him if he knew where the starter fluid was.

"I don't suppose you know where the brake cleaner is," the man said to me, obviously joking.

I pointed behind him at the rows of cleaner.

"Thank ya, ma'am. I didn't think I'd have to ask a woman for help. Sometimes you can't do everything yourself, I guess!"

He turned and left, his brake cleaner in hand, a smile on his face.

I wrinkled my brow, unsure whether or not I should be offended, when my eyes landed on a single bottle of starting fluid.

Sometimes you CAN, bitch, I thought to myself, and plucked it off the shelf.

Haha! It's been too long. Good one seester!