Earlier this week I was in the office of a very well-known professional service provider. Doing some stuff.

Truthfully, I got seriously screwed and it cost me a LOT of money.

Take that how you want it. Perverts.

While I waited for my appointment, I decided to stare at everyone in the room. Usually, I have people skills that prevent this awkward (for others) behavior, but this week I think I'm some kind of bat-crap crazy which my or may not be linked to PMS. It's just better not to focus on that, but recognize that I was not my usual self.

I stared down an elderly couple, but they were busy talking about grocery lists and some kind of pot luck. Boring.  There was no one else in my line of vision at that moment, so I moved on to staring at the list of services on the wall (again, do what you want with that). Super sucky.

And then this walked up.

You guys, I'm not even kidding. This is almost exactly the same guy. I'm not even sure that it isn't him. I would apologize for the picture quality but I didn't take it. I just stole it off the internet.

Anyway, this dude walks up and starts chatting with the receptionist whom I didn't even realize was there the entire time. She had been sitting at the desk, bent over and digging through a filing cabinet. I made a note to work on my awareness. Just in case a position ever opens up at the CIA, I want to be ready.

At first the receptionist and this kid in suspenders only conversed about schedules, which bored me. Don't really care if you have choir practice tonight, homie. And judging by the look on her face, neither does she. So I took out my phone and went through my text messages to see if there were any old texts in there that had once made me mad so that I could renew that madness and back-text them in anger (please review earlier admission to being nuts and then try to keep up).

But I almost always delete every text I get unless it's from one of three certain people (for entertainment purposes), so there was really nothing there. And I kind of want to punch people who sit around going through their phones in order to avoid looking awkward, so I put my phone away and resumed staring.

The older couple had disappeared by then, so the only people left were the receptionist and the Dork.

They refused to look at me, so I was unable to cause them discomfort. Instead, I stared at the ceiling while I eavesdropped. But only for a second, because the kid turned out to be a man-whore, which required me to look at him with disgust.

Of course, I decided to text Elle and share with her the incredibly weird exchange going on before me. Feel free to picture me sitting in an office chair, legs crossed while leaning my elbows on my knees just staring at these two fools as I text (poorly, because I can't take my eyes off these fools) to my sister.

Me: Watching 17 yr old kid hit on 40-something woman. They both work here. It's painful to watch and I kind of want to slap him and rescue the woman, although it looks like she's going to do it herself in a sec.

I watched this kid lean against the counter, his suspenders clanking on the laminate counter top as he smiled all slimy-like at the woman. He droned on and on about choir practice and how he could skip it to work late with her because he didn't have a curfew (future CEO and cheater in training!).

Me: She told him to get out. Apparently his shift is over but he won't leave. Keeps talking about stupid teenage boy stuff. Told her she was too young to have kids in elementary school. Barf.

Elle: You should walk up and just say "Well that was awkward to watch. I'd save my scrap of dignity and listen to her. As a fellow woman, I guarantee you it's a waste." Or something.

At this point, the little germ-ball asked why this apparent mother-of-four hadn't returned his texts. She smiled and replied that she didn't know they were from him and then she leaned in and scrunched her eyes up in what I think was supposed to be a sexy blink but really came off as astigmatism. Or a seizure.

What? Hello, woman, you don't try to brush off this little twerp and then use your poor flirting skillz to reel him back in. The entire scene was like a terrible public-access television show that I just couldn't pull the plug on.

So then this kid asked her if he can work Thursday. She leaned over the computer monitor and shoved her butt out, which was COMPLETELY unnecessary because he was standing alongside her, facing the monitor as well. It was funny because she misjudged the placement of her elbow in relation to the keyboard, which flew up and clanked all over and fell off the table. Okay. Even I felt bad for her. I mean, I myself have zero flirting skillz and I think I could have pulled off something less ridiculous. In fact, I saw this thing on Pinterest that was absolutely written for me, and even though most of you have already seen it, don't steal it because it's mine: 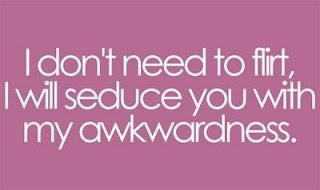 I need this in my t-shirt collection

Right? Those of you who know me, KNOW THIS IS ME.

Anyway, so the chick is looking at the schedule and says he can work Thursday. Then she asks him what his name is and gets this really weird smile like she thinks she's a stand-up comedienne now and the kid says, "I KNOW you know my name" all seductively and I was like EW HOW EFFING GROSS.

Me: Um. No, because now they're exchanging info and talking about schedules and I think she said 'husband.' She's MARRIED. GROSS.

Elle: Write a note that says "Shame on you" or "I know what you're doing, whore" and drop it as you walk by.

I never got to see what happened next because right then I got called in for my appointment.

Tax preparation and a show.

Now you get the "screwed" reference, don't you?