Halloween. May it die.

So I barely made it out of bed this morning. I sort of felt like I may have been slipped a Butteringer Roofie and then blacked out for 7 hours worth of after-hours candy consumption.

Because I didn't eat that much, really. I think it was how many I ate in a row. Like, not to gross you out, but I had a moment of shame where I was shoveling candy in my mouth with two hands. But only for a second. It's not like it continued all night long.

I was teasing my 5 (who went as a Parrot) and she sort of got a little nasty? And so I may have grabbed her bucket and ran around the street yelling that I was going to eat it all. And then Squawker (which is what we called her the rest of the night) might have thrown a huge tantrum so I may have opted for a Mother of the Year Moment and started scarfing her candy because really? If you sit there and freak because I'm trying to goof off with you, I will make you cry.

Anyway. So I ate like, six pieces right then and there. Squawker got seriously pissed and told me that she was going to hide her candy from me, which I found amusing because there is no where in my house to hide anything. Plus, hello, I'm a Mom. I have eyes in the back of my head. Which she is very aware of.

Squawker eventually calmed down enough to hold my hand and continue trick-o-treating (coincidentally right after being given the option to either suck it up, or go home to bed AFTER I ate all of her candy which, in hindsight, worked out way better for me because those six pieces nearly killed me).

To backtrack a second: A bunch of us Moms in the neighborhood had decided to go together in a big group. Safety in numbers, right? I meant for the adults. Those kids were on a rabid sugar high by 4pm and had long ago lost their senses by the time we headed out to Trick-or-Treat. I did not dress up. Initially, I was going to steal Rawr's idea and dress as Peg Bundy. I know, right? AWESOME. Except I got busy and didn't plan accordingly. But Rawr did. She found this cool thing called a Sugar Skull. Check her out. 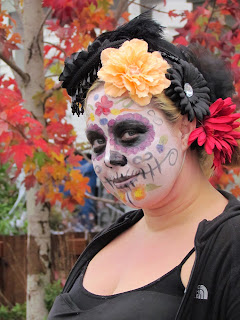 There was a very touching moment where I accidentally accused a Grim Reaper of being a child molester and Squawker decided it was better to hold my hand than possibly get snatched up by a towering black robe with red glowing eyes. And it was a tiny bit tricky to keep the handfuls of candy out of the kids' mouths. Every time I turned around one of them was plowing through another chocolate bar.

Something else that was incredibly fun and a First Time Experience for me (other than making accidental accusations because I was on a candy high and apparently lost the use of proper sentence structure) was when my 11 asked to go out with some of his buddies and like an idiot, I said "SURE, SON! YOU GO RIGHT AHEAD!"

Now. Please know that he was given the third degree. And Rawr's 13 was going as well. The boys were supposed to go with the other kid's mom.

Sweet thing about pre-teens. THEY LIE.

Which sucks for them because somehow my 11 got separated from the group and (in a moment of clarity) decided to come looking for us (aka All The Grown Ups). Which was smart.

What wasn't smart was the lie in the first place.

They are all so grounded.

Please rest assured that Rawr and I put the fear of God and Death into them. I may have even tied in my  story of meeting a (falsely accused) abductor. See? Everything happens for a reason.

My 11 was informed that all the loot he scored last night was now mine, and doesn't it so totally suck that all those lies and deception were for naught? For I own the candy.

And glad to be alive.

I may have taken the Lesson a little far.

The kids were even more pleased to find out this morning that a local dental office will buy back Halloween candy at a dollar a pound, and then ship that candy overseas to our troops.

I think that's sort of awesome. Everyone wins.

Except the kids. Because I'm keeping their money in a Cavity Fund. 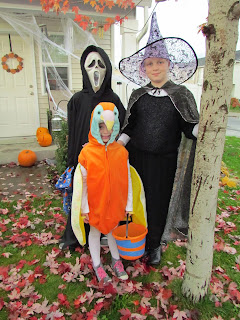