Not like, Oh, I do believe I will take a single Advil for the mild comfort I seem to be temporarily experiencing.

More like, Holy Mother Humper, I want to end it all just for the sweet relief of nothingness!


My back hurts from sleeping on what I am now absolutely unsure of what was maybe a termite's nest. My wrist is sore from catching my entire body weight as I jumped sideways and rolled down a slight incline after Rawr's husband decided to sneak up behind me (repeatedly) and scare the crap out of me because I may or may not have been suspicious of Bigfoots in the trees (where we camped, it is a Felony to shoot and kill a Bigfoot. I KNOW).

There were a lot of bugs, most of which spent the weekend attempting to crawl down Rawr's tank top. There may have been a brief conversation around the campfire between Rawr's husband, their 13 year old son and my 10 year old son regarding cauterizing things and my son asked who got what cauterized at which point I heard guffawing coming from Rawr's tent as she basically expired from laughing so hard. We spent some time teaching the kids how to properly sound a Saski Call (aka Bigfoot Yells). Also, I'm pretty sure I woke up drunk in my tent Sunday morning, only there wasn't any alcohol.

As you may recall my mentioning in the last post (or not, since I can't properly recall any information given earlier than five minutes ago) I took my kids camping with Rawr and her family this last weekend.


I've never taken my kids camping. We were always going to go, but then when the oldest two were at the age where we felt they would enjoy it, we had our youngest, so that threw a wrench into the mix. And then there was the whole slavery thing where I basically lived in the restaurant, so it just never happened.


Peeps, my kids L-O-V-E-D it. My 5 asked if she could move to the woods, even though windy roads make her puke her guts out.. My 9 basically set up her own camp in the creek and my 10 kept expressing his love for the art of tent camping by throwing sticks in the fire, smiling up at the trees and proclaiming it all "awesome."


I think my favorite part was where I left my good camera on my nightstand at home and only had my little backup camera with about twenty minutes of battery life in it.

Nevertheless, we did capture a few photos. None of Bigfoot, though. 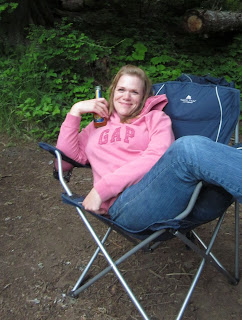 Okay, so there were a few beers. But that was Friday night. I woke up feeling weird on Sunday morning. Plus, yes, thanks, I realize how huge my butt looks. IT'S THE ANGLE. 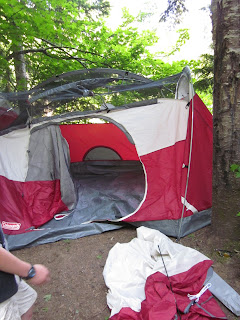 Rawr's husband put together my tent. When I mentioned that it looked a little funny, he tried to stab me with the tent pole. 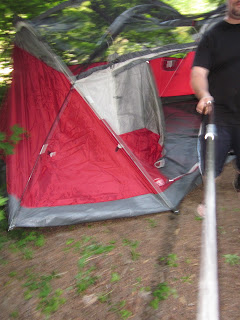 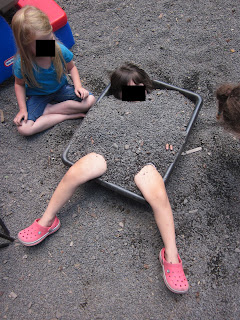 The little girls were panning for gold. Eventually they realized that gravel doesn't hold a lot of promise, so they buried one of the kids instead. 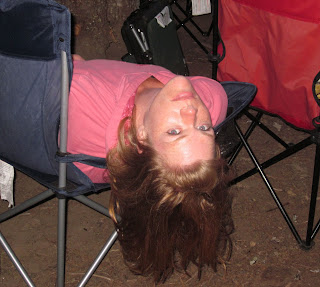 Me. Pre-Malaria. I'm sure my aching back has nothing to do with the way I use a chair. 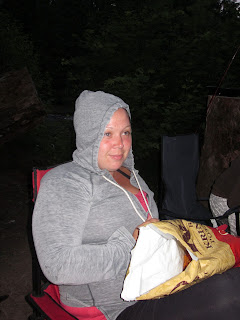 Rawr had to hold the potato chips hostage from the kids because apparently fresh air makes you devour everything in sight. 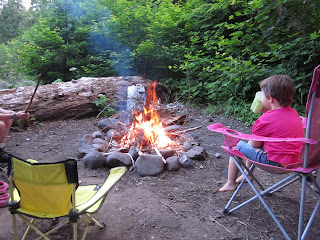 Rawr and I have plans to take the kids out camping again this summer. So far, we managed to return with all the kids in tact. We're rather fond of pushing our luck.
Posted by Unknown at 1:16 AM