OMFG, enough about last week's imposter home invasion (yeah, sorry about not ever posting that story. I got kinda busy. Long story short, no one broke into my home, but a stranger was in my garage and he yelled at me. I'm a sensitive soul, so I didn't do anything in my own defense except move away).

I guess I should have set this up by first posting about the home invaders, because I later became one myself.

It all started when my cat decided he hated the dog and the cat moved out, only he didn't tell anyone. At first, he pulled a quick three-day disappearing act on us. I solved that by walking by the sliding glass door one evening and thinking, Hm. I haven't seen the cat in a few days, and then suddenly POOF! there he was at the door.

A week later, I noticed it had again been a few days since a feline sighting, so I would randomly walked past a window, pause, think to myself, Where is the cat? and quickly shoot a look at the window or door and expect to see the cat magically appear out of thin air.

Cut to three weeks later and I was pretty much giving up hope of ever again seeing the damn animal, and I'm fairly certain the multitudes of people who walked past my house daily thought I was insane because I was forever stopping as I passed the window, then flipping my head to the side as I inadvertantly locked eyes with them while they ventured by (for whatever reason, there are a ton of people who walk down that street exercising people, animals, children, etc).

I know the dog had a little something to do with it because he is used to "playing" with the cats at his other house (still ain't nobody got time for that story) and my cat wasn't having ANY of those shenanigans. Yet the dog continued to "accidentally" surprise the cat on the landing, which resulted in multiple scufflings and a lot of hissing. At least the dog had the decency to look guilty when I gave him The Look (raised eyebrow with a smirk, and usually a question like, Really? Was that necessary?).

During the time the cat was missing, we moved. Out of town. Forty miles away.

And my kids feared they would never again squeeze and love and hold and squish their beloved pet again.

Yesterday we went back to the old neighborhood to hand out flyers with a picture of the at, and our phone number.

We went to speak to the lady across the street.

Lady: Him? I just saw him yesterday.

Me: Seriously?! [questioning her sanity] WHERE?!

Lady: [pauses for dramatic effect, then points] There. In that abandoned house.

[cue creepy music, flashes of lightening and picture a skull and crossbones spray painted on the front door]

And she did. She went in through a broken window (relax, I checked for busted glass. There was a lot of it, but not anywhere near her). I totally would have volunteered to get a chance at contracting tetanus, but my ass wouldn't fit through that tiny window.

I stood nervously near the front door, after having instructed the 10 to meet me there so I could come in and help her search. The other two kids were milling around me, impatient to join the rescue of their beloved pet.

A moment. Maybe I should mention that the whole neighborhood knows the family who owns the abandoned, foreclosed home, so we were cool. Everyone knew what we were doing (though no one offered to help). It was like having an in with a street gang except nothing like that at all.

My 10 came rip-roaring around the corner, skidding on crap and yelled to me, where I was perched near the window.

Oh, holy hell. What does that mean? Is he dead? Alive? WHAT IS SHE TALKING ABOUT?

We had to try three separate doors before my 10 could let me in, the four of us spilling into the house and running toward our yowling cat.

It was definitely him, and the meowing was coming from the bowels of the biggest trash heap I've ever seen.

At first, I was gently moving things aside, like a toaster and other appliances. Then I realized it was all crap anyway, so I just started chucking it across the room.

Out poked a kitty face from that rubble and I swear to you, my kids almost burst into tears when they saw that mangy varmit clawing his way out.

I grabbed the cat, prayed that none of us needed that tetanus booster and we booked it out of there.

Our pet is home safe at the new house where, I shit you not, the dog greeted him with a toothy smile and a look of glee. The cat looked utterly pissed and shot me a look that said, Are you fricking KIDDING ME?

And again, all is right in the cat vs. dog world. 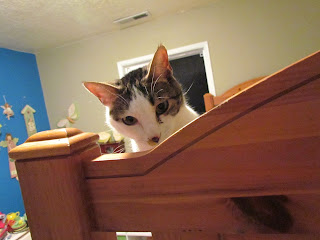 awesome. glad the kitty is alive. look out for the dog.