It was not your fault, but mine

Concerts should come with a warning label.

Something obvious like, Hey Ginger. Have a few beers but do NOT try to slide down the banister in the stairwell and Buy a better pair of boots.

And then I feel like I should have a warning label, like Will spill her beer and pick a fight in the ladies room over how many Emily's are allowed at the venue. Potential for fun, but usually someone ends up injured.

Because I think someone is always either falling, tripping, or being pushed at one point or another every time we go out.

So last night, Elle and I hit the City to see Mumford ad Sons. 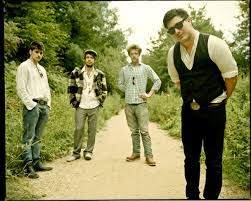 Is it me, or does Mr. Mumford remind you of Brendan Frasier? Hubba Hubba. If it were 1993, that is.

Elle and I are simply ga-ga over Mumford. We love them. If it wasn't frowned upon in several societies, we would make off with the entire band, ferry them to a remote location where we would make a skin suit from their hides and wear it.

Too weird? Whatever. We aren't dangerous. Unless we are together.

Which we were, last night, in the city, surrounded by thousands of other Mumford Fans. I think I set the tone for the night early on when Elle and I were leaving her apartment. I slipped on the curb, busting the heel off my left boot. I nearly fell on my ass, which would have been a GREAT way to begin the evening. I had to borrow a pair of boots from Elle (the same boots I gave to her because I can't walk properly in them. You'll see what I mean later on).

We managed to make it to the venue without further incident. Elle knows a guy who could totally hook us up with free booze, so naturally that hunt took precedence over finding our seats. We almost found him, too. Six escalator rides and one near miss with the elevator door later, and we'd found him.

He didn't like me. I could tell from the way he slammed my beer on the counter, causing an eruption of foam to cascade onto the bar top. He chatted with my sister while completely ignoring me, except to toss an angry glare my way every few minutes. Whatever. Just because I always make my sister order my drinks for me doesn't make me unlovable.

There were several trips to the bathroom on several different floors of the venue. We enjoy variety. At one point, I thought it would be a GREAT idea to slide down the banister in the stairwell. All I will say is that while I was successful in my slide, it did NOT feel good and I am no longer able to sit without a jagged pain in my butt. Plus, I almost had to jump a girl in the bathroom for parroting my name overandoverandoverandover again. Seriously. How many of you would stand in a bathroom and call out the same name over and over again? Elle would say I was just mad because I kept answering her and she was ignoring me. What. That's rude. 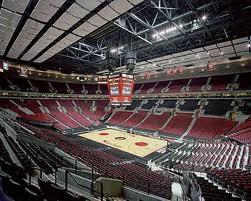 This is what it looks like when it's set up for basketball, not a Mumford concert. Its huge. Imagine how big the entire venue is, and we were loose in that place.
Unchaperoned. And drinking. WHAT COULD GO WRONG?


Four beers later, Elle and I found our seats. Mumford came on, and we left to pee.

Seriously. I think women are at a disadvantage when it comes to our plumbing. We kind of CANNOT hold it or we will die, and we cannot pee into a beer bottle. Because the beer came in cups and they weren't empty yet.

Every time we left to use the bathroom, someone would snag our seats. The first time it was cool. I was nice, smiled, touched the guy on the arm in a way that let him know I would pound his face if he took my chair again (I'm fairly aggressive when I've been drinking) and sent him and his buddy on their way. The second and third time, it was annoying. The fourth time I spit on them.

Jay Kay. I'm a lady. I asked him if he had a moment to talk about Jesus Christ and we never saw him again.

Mumford gave a great show. They have an amazing sound and I adore them.

Elle gets all grabby when she drinks and likes to pull me around by the hand. I was cool with that since we are sister-wives, so I let her drag me through the crowd, to the amusement of others. It was when we hit the stairs again that it happened. But it happened so fast I almost didn't realize what was going on until I was being laughed at, gasped at, everyone thought I was dead and there was talk of some jacktard posting the entire incident on their Facebook page.

I fell down the stairs.

I was not drunk.

Okay, I was almost drunk.

But it wasn't my fault. I slipped because I was wearing shoddy footwear, and Elle was ahead of me, hauling me behind her and I just sort of... went down.

I hit both my knees pretty hard (bruises to prove it) and I think I tore something in my rib cage. Seriously. I have to stand a certain way if I want to be able to breathe.

I brushed off the hands of people trying to help (or cop a feel, who knows) and tried to salvage any shred of dignity I had left.

After the show, we spilled out onto the street and knew immediately that we were lost.

We spent about twenty minutes circling the venue trying to find our parking garage. There were about seven of them. Okay, maybe two. But we exited on the wrong side so we were completely disoriented.

And even when we did finally find the garage, we were stuck there for another twenty minutes because ten thousand million people were all leaving at the same time. That was okay because Elle and I entertained ourselves by singing along to the radio. We can really rock us some Imagine Dragons and Anna Kendrick.

Eventually we got out of there and sped home.

That is exactly what concerts are supposed to be about! I'm proud of my seesters. At least you didn't get "Emily Drunk" (new phrase, just coined it) and spend the entire concert huddled in the back trying not to vomit.

Also, I hate you bitches for seeing Mumford without me!

I think I love them, too. Haven't heard them before your little sampling above......Knew they had to be awesome.....

Gary, we ARE bitches and we missed you the whole time we were there. An yeah, I think I have finally learned how to control myself. Well... I ran out of beer. I'm not sure what the night would have been like had I brought more cash. Or any cash, since it was actually free.